I Tried to Restart my Dexcom G6 Sensor

So yeah, I tried to restart the Dexcom G6 sensor.  And it didn’t work.

No offense, Dexcom. I respect your work and I love, love the data from this device.  My health is, without fail, better for the introduction of a CGM into my life.

But this shit is expensive, and cost is often a deterrent for folks trying to access this technology regularly.  Insurance coverage is amazing but copays and deductibles can be enough to keep some PWDs off something like a CGM.

That said, I wanted to know if I could restart this thing.

I’ve restarted plenty of sensors in the past, but I’ve never, ever been one of those people who could get 20 days out of one sensor.  Mostly because my skin went berserk and I would break out in this itchy, raised-skin-sort-of-wretched looking rash from the adhesive.  This rash response went on for over five years, only to be fixed(ish) back in 2017 after a rumored revision of the Dexcom adhesive properties.  The rash from the Dexcom adhesive, in combination with an irritated skin response from any tapes like Opsite Flexifix, kept me from getting truly extended life from my sensors.  At best, I’d get 11 – 12 days.  On average, I got the FDA-approved seven days (but not for lack of trying).

So when the Dexcom G6 came out with a hard stop after 10 days of wear, I was frustrated on behalf of people who scored majorly extended sensor life but it didn’t really change much in terms of how I personally wear the sensors.  But I did want to see if the sensor life could be extended.

The sensor timed out and I received this notification: 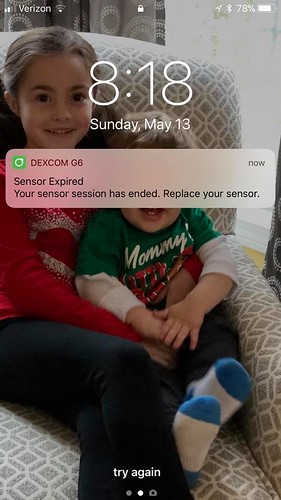 OK.  So my sensor was truly hanging on by a thread (I’m not sure if I’m rough on sensors or if the adhesive on the G6 is a little weaker than that of the G5, butI had plenty of tape on the G6 sensor by Day 10).  Regardless, I hit start.

And I was weirdly encouraged to see that it did restart.  (The app asked me if I had a sensor code, I said no, and it told me I’d need to calibrate.  I was fine with calibrating if I could get an extra day or two out of the sensor.) 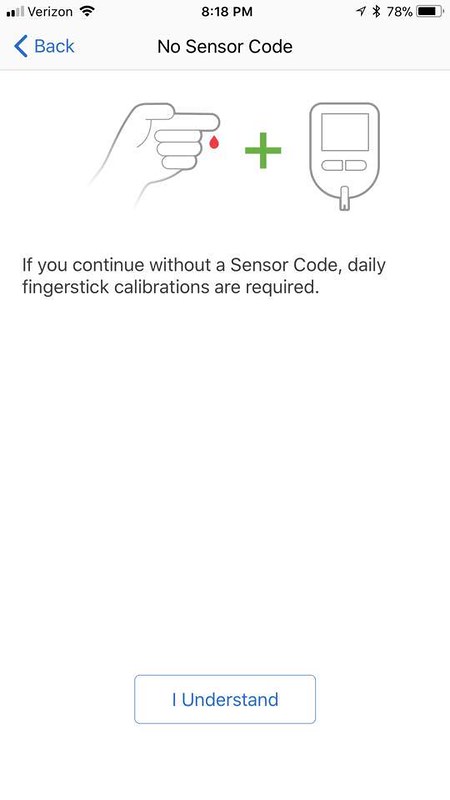 I understood. So I hit restart and the timer started to tick down.  I felt hopeful. 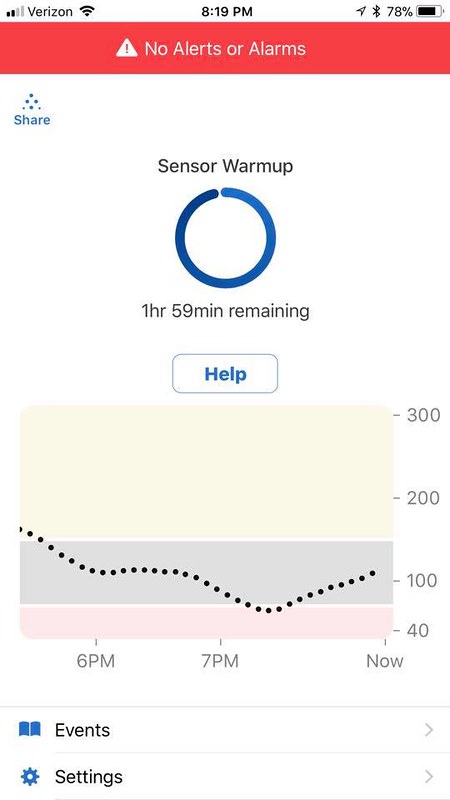 And about 3o minutes into the restart, the app slapped my wrist (metaphorically) and said NOPE to my attempt at restarting: 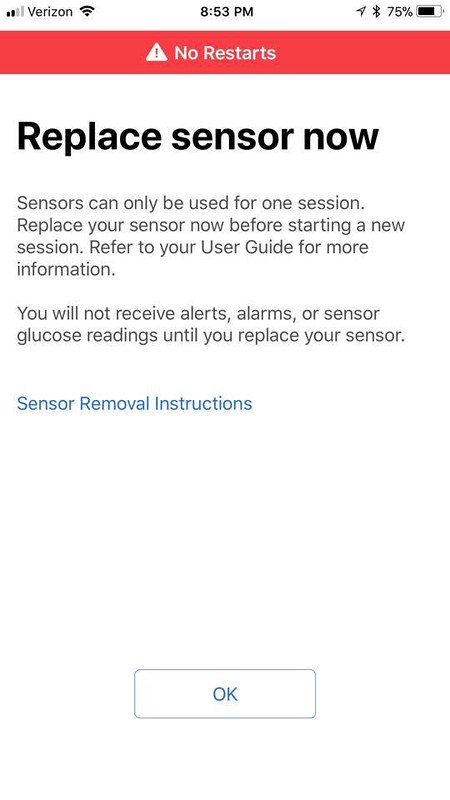 And I’m of two minds here:

On one hand and as I already mentioned, restarting a sensor is important to help mitigate cost.  It also helps increase the time between sensor applications, which matters to people who think putting a new sensor on is painful.

On the other hand, the FDA has approved the G6 to be used without calibration, and the technology has to meet certain standards in order to be classified in such a way.  It’s easier for me to follow the “10 days” rule knowing my skin wouldn’t stand for extra days anyway, but I respect the hoops this device approval was forced through.  (Doesn’t mean the broader diabetes community won’t try and hack around these rules, though.)

In the case of my attempted restart, I did not remove the transmitter from the sensor because it literally needs to have the sensor housing bit snapped in half in order to slide the transmitter out.  (It doesn’t snap into place, held by flexible arms like previous iterations.  The new transmitter housing is like sliding the transmitter into a sleeping bag, and the only way to release it is to break the housing apart at the middle) not to mention that the adhesive was barely clinging, so my first try was less than optimal.

I’ll try again in about a week.