Diabetes Month: The One About Anxiety

I’ve had some anxiety flare ups in the past.

Like in college, when I’d break out in hives across my abdomen, tied directly to the more stressful moments – when exams were up, when I was working the early am breakfast shift five days a week and then going to class, when my parents split.

Like after my son was born and I pictured birds pecking out his eyes when we’d be on a seemingly innocuous walk around the bright and sunny neighborhood.

Like for the last year or so, due to the political unrest and a news cycle that ramps up feelings of instability.

For the last few weeks, I’ve had a lot of trouble going to sleep at night.  Not because I’m not tired.  I’m exhausted, honestly.  But my brain won’t shut off at night.  I worry about my kids and their health.  About my marriage and family.  About things that need to be tended to in the house – what needs to be cleaned, what needs to be replenished, what paperwork needs filing, etc to the etc of all et ceteras.  About everything I can control and the shit I can’t.  Everything all at once.

Once rolling, this worry spins out of control and then I start to worry about my body and its health. The autonomic actions of my body – breathing, heartbeat – become questionable.  Is my breathing too rapid?  Is my heart beating too quickly?  Does my arm hurt now?  Am I having a heart attack?  I feel nauseas; is that a heart attack sign?  Do I wake up my husband and tell him I’m having a panic attack and a heart attack?  I try to mentally force my heart to stop racing, force my brain to stop racing, but they’re off like greyhounds chasing a rabbit.

Last night, I had a nightmare that a faceless woman died in my arms due to a low blood sugar.  She cried before she died and I woke up crying, immersed in fight-or-flight mode and had to reason myself back into a moderate mindset.  I could not fall back asleep.  My own blood sugar was 90 mg/dL and stable but I felt compelled to have a snack just in case (despite wearing a CGM, despite my husband beside me, despite, despite, despite but because, because, because).

I know it’s the news cycle that’s bringing me back into the anxious cycle of my early 20’s.  My emotional centers are permeable in that way.  I know myself well enough to see the cycle starting up and know I’m pinned against the wall of my spinning mind.  I’m on the Gravitron at the county fair.

What I don’t know is how to stop it entirely.

I’m embarrassed to admit that I am panicky a lot of the time these days.  It doesn’t feel comfortable to feel these feelings and it feels even less comfortable to write them down, but it’s how diabetes is these days.  The reality of the possibility of an issue while I’m asleep is a thing.  And that possibility has rooted in my brain like a spider plant, growing and latching onto the next patch of fertile synapses that should be used for writing or parenting but is now infested with spidery panic.  The reality of life with chronic illness is that it makes you acknowledge the forever of it, which makes me question my forever with it.

This will pass.  I know it will.  It has passed in the past.  Asking for help is hard.  Waiting for it to work is hard.  Pretending that diabetes isn’t something I worry deeply about at times is hard.   Not every day is hard, but the few that are become a full stop.  Spending Diabetes Month trying to show a strong, capable version of life with diabetes is hard when some nights are spent worrying instead of warrioring.

This is diabetes.  Or at least it’s my diabetes at the moment. 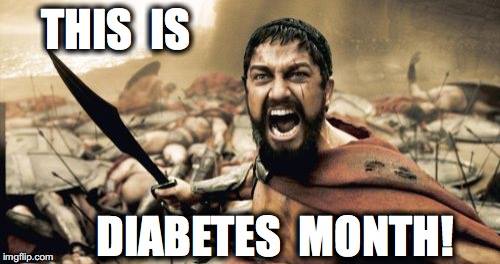 How Real Do You Want It?