Do You Hate Diabetes?

I asked some friends on Facebook if they hated diabetes, and the answers* were as varied as the folks responding: 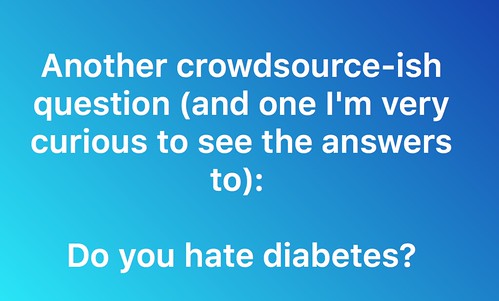 For me, after 31 years of type 1 diabetes, I don’t carry around a lot of anger or shame about diabetes, but I don’t harbor warm, fuzzy feelings.  I don’t hate it. I don’t like it and would get rid of it in a heartbeat if given the chance, but I don’t spend the day loathing it. (Some days, yep.  I can’t pretend to be happy about this condition.  Especially now that I’m getting older and Things are Happening that make me wonder, “Hey, is this diabetes?” or “Hey, is this just the aging process?”)

But I think that’s because it’s mine and mine alone. If one of my children had diabetes, I’d hate it seventeen different ways.

The responses from people on Facebook were so diverse, just like our community.  And I think responses could also change depending on what’s going on in the world, in their lives that day, or what result might have just stared back at them from a glucose meter. No “right way” to feel. Whatever way you feel is right.  Diabetes is part of every day, and the emotional influence is has on our lives is rarely discussed but nonetheless pervasive and constant.

But I’m glad we’re starting to talk about it.  No matter how we feel about diabetes on any given day, the community that’s bloomed around this disease continues to inform, inspire, and redefine living with diabetes.  That’s something worth loving.

(* All of the following bullet points are from comments on th FB thread.)

5 Worst Things to Consume If You Have Diabetes.
Share:

Check Even When You Don’t Want To