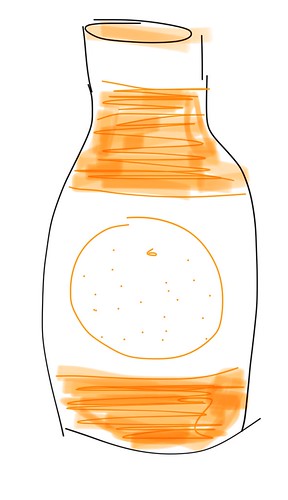 “Do you mind ringing out this orange juice first?”  I asked the lady who was working the cash register.

“No problem,” and she went bip with the scanner against the bottle’s bar code while my Dexcom screamed BEEP BEEP BEEP! from my phone.

I opened the bottle and downed the majority of it in one, open-throated gulp.  My son, strapped into the front of the shopping cart, reached over to the conveyor belt as the groceries were unloaded, one by one, by his mother with the bird hands.

“Hang on, little guy.  Here, play with this,” I said, handing him a crinkly toy elephant that was peeking out of my purse.  I ran my sleeve against my forehead to catch the beads of sweat that threatened to run down my face.  My ankles felt weak and I know I stumbled a little when I went to unload the contents of my carriage onto the conveyor belt.

“Miss, do you have a Stop & Shop card?” the cashier asked, sizing me up.  She was my mother’s age.  She watched me fumble with my wallet in search of the card, and I dropped it instead of landing it into her hand.

“Hang on a second,” I said, carefully bending over and plucking the card from the floor.   My son yelled, “YEAH!!!” and then “HEY!” from the carriage.  My blood sugar was still dropping and the Dexcom kept hollering.  Clumsy hands and the fog of hypoglycemia made my every movement look ridiculously awkward.

And I knew, knew, knew that the cashier thought I was drunk.

I read Riva’s article about hypoglycemic episodes looking like drunk moments and shook my head in recognition of the concept, but honestly hadn’t ever been mistaken as drunk when low before.  In college, I had this credit-card sized placard in my wallet that said something like, “I have type 1 diabetes.  If I seem drunk, please allow me to check my blood sugar to make sure I am not experiencing low blood sugar.”  I never had to use it, and my college roommates and I giggled at it once in a while, probably because we were actually drunk.

But yesterday at the grocery store, I wished that card had been in my wallet.  I would have handed it to the cashier and pointed sheepishly at the orange juice.

Instead, in the fog of my low, I gracelessly unloaded and paid for my groceries while wrangling my one year old.  Running my debit card for the purchase, I said to the cashier, “I have diabetes.  My blood sugar is low,” but I’m not sure she believed me.  My brain wasn’t sweetened enough to really care.  I was more concerned with pushing through to the other side of this low.

After we paid, I moved the carriage over to a row of benches just inside the main door of the grocery store and we sat there.  I finished my orange juice.  A few minutes later, the arrow on my CGM graph started pointing in a more respectable direction.  I almost went back to the cashier to explain myself more lucidly but decided against it.  Maybe next time I see her, I’ll explain.  For now, it was time to go home.