[Please read my Tandem disclosure.  I was not asked to write this post.  But I need to disclose anyway, because it felt weird not to.] 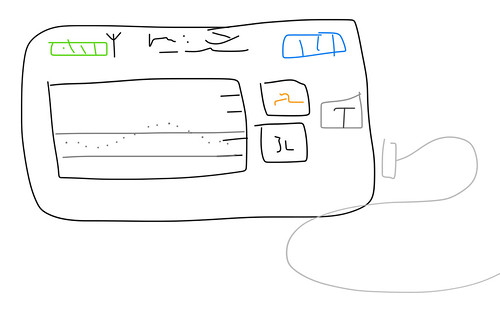 Even though the update email came in a few days ago, I didn’t have a chance to update my Tandem X2 insulin pump until yesterday afternoon.  My original intentions were to sit down (preferably with a cup of tea and my reading glasses, so I could look the part of “focused” which would hopefully, in turn, become real focus) and update my pump in a relaxed environment, but that’s not a thing in my house anymore.  Every time I went to update the pump, the little Guy needed a snack or Birdzone wanted to play Spit (she kicks my butt regularly) or one of the neighborhood kids would roll through the house or the phone would ring or … the list of distractions remains long.

So I had to just sit down at the kitchen table and update the damn thing, house tornado be damned.

It was easy.  Thankfully, because I was only able to keep half an eyeball on the process as it unfolded.

The information I needed – my pump’s serial number and my “update ID number” – was in the email from Tandem Device Updater (if you’re looking for it in your inbox), so once I downloaded the device updater software to my computer, it took just a few minutes to update my pump.  I plugged my pump into the charger and then stuck the charger into the computer’s USB port, followed the prompts, and let my pump get pumpier. 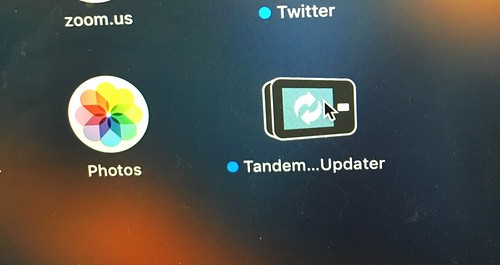 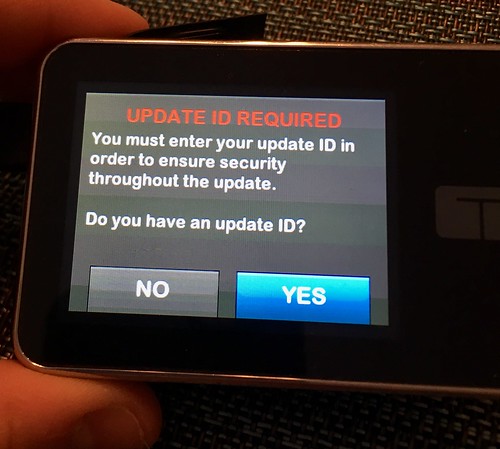 I knew the pump was ready to roll once this screen came up –
the update ID from the email went here. 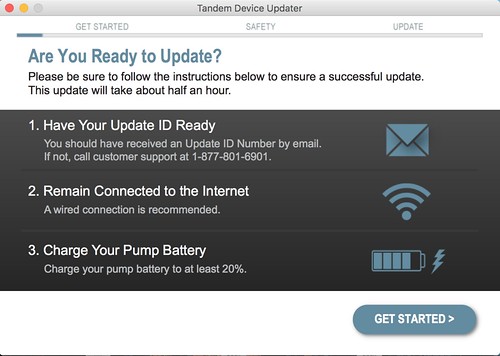 Once the pump was plugged in, this screen popped up.

“Whoa, your pump updates like an iPhone?”  The 13 year old boy who lives down the street asked.

“It does,” I said, watching the blue progress line for the update move across my computer screen.

Truth.  My X2 now grabs Dexcom G5 results and shows them on the pump.  And I’m still learning the ropes with this new update.  In total, the update took about 15 minutes to work through.  I decided to wait until I was ready for a site change because in doing the update, I’d need to swap everything out anyway, and would also have my IOB set back to zero.

I have my iPhone running the G5 app in addition to the pump, and both appear to be working fine.  I was concerned about battery life after making the update, but since it’s been less than 24 hours since updating, I’ll have to come back to that at another time. 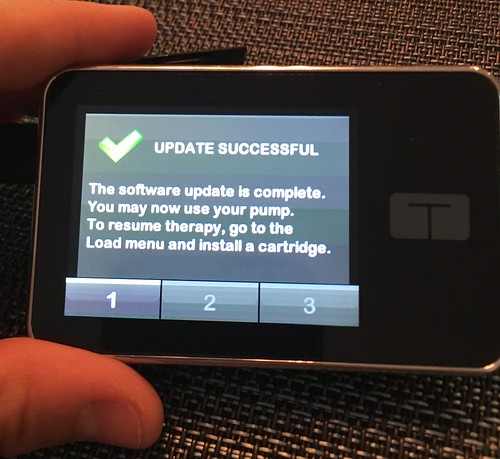 What was nice, though, is that my CGM was already up and running on my phone before I updated my pump, so when the update completed on my pump, the CGM results showed up immediately.  It didn’t seem like I had to independently calibrate my pump and my Dexcom phone app.  I’m rebooting my CGM sensor as I type this, so I’ll have a better sense of how this all works in a few hours.  In addition to CGM functionality and battery life, I’m really curious to see what the payment/update reimbursement structure will look like for future updates.  The G5 update was free.

The bottom line, for me, is that updates are available for my insulin pump that don’t require me to wait for a FedEx box to arrive before I can access them, and that’s damn convenient.  Having a pump that can be updated from my house while dinner is cooking (read: burning), kids are running amuck, and emails are dinging makes diabetes fit better into my life … in that I don’t have to organize my life around diabetes.

Mystery of the “Right” Button: SOLVED.