Today’s guest post comes from Elizabeth Rowley, director of T1International – an organization working towards sustainable access and affordability of insulin, diabetes supplies, medical care and education for all people living with type 1 diabetes.  They are planning a protest at Eli Lilly on September 9th, and Elizabeth is borrowing SUM today to share the who, what, where, and why of that plan. 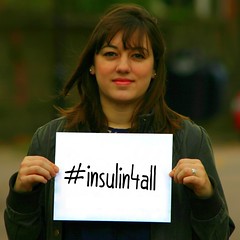 The diabetes community has watched in agony as the prices of insulin have increased again and again, with the most recent outrageous increase of 7.8% by Eli Lilly. To get right down to it, the list price of Humalog was $274.70 per a vial as of May 2017. That’s a price increase of 1123% since June 1996.

Insulin manufacturers keep the cost of insulin production a tightly-guarded secret, but U.S. prices are likely hundreds of times higher than the cost of making the drug. Patients in the U.S. and internationally have died due to an inability to afford insulin, and physicians report seeing an increasing number of insulin-deprived patients coming into emergency rooms in crisis. The insulin price increases have been called “price-gouging, plain and simple” by U.S. Senators and a “racket” by an endocrinologist writing in the New York Times.

We in the diabetes community have expressed our frustration online, in meetings with these companies, and in numerous blog posts. T1International has also had conversations with some of the “big three” insulin producers about insulin affordability, but unsurprisingly we were met with standard PR responses and blame shifting. Some of our other attempts to talk have been ignored, but the diabetes community as a whole has been talking to Lilly and others about these issues for a long time. Eli Lilly, Sanofi, and Novo Nordisk know that people are outraged, suffering and dying because insulin costs too much.

I think most of us can agree that none of the concerns that have been expressed have been taken seriously enough. Taking patients concerns seriously does not mean somber conversations, hosting forums with advocates or creating limited charity programs. It means actually making insulin affordable and not wringing every last dollar of profit out of desperate people. It means putting people before profits because pharma’s prices are putting people in danger.

That is why an #insulin4all demonstration is being held outside of Eli Lilly’s headquarters in Indianapolis on September 9th. People with diabetes are demanding change.

Specifically, we are asking Eli Lilly for three things: 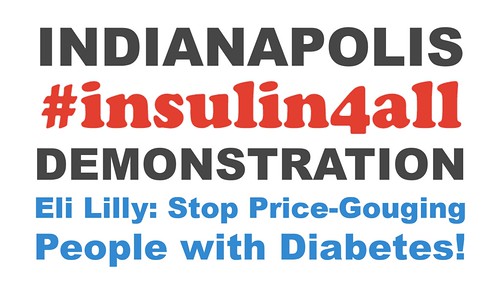 Why Eli Lilly, you ask? The location of our partner organizations, People of Faith for Access to Medicines and Public Citizen in Indiana, makes Lilly a good first target. On September 8th, in solidarity with the protesters, we will also be holding an online day of action about insulin pricing – addressing all three players in the insulin market.

We know that Novo Nordisk and Sanofi are just as much a part of the problem as Eli Lilly, and that all of them must be held accountable. We are very open to planning something similar outside Novo and Sanofi in the future, so if you want to help organize, please get in touch!

These companies’ business models are dependent on government decisions about regulations and bulk purchases of their products, so the companies absolutely will provide transparency and lower prices if the people and their representatives demand it. This demonstration can amplify our cries and raise public awareness that the price gouging must be reined in. We believe the momentum will continue to build, and we hope you will join us in speaking out.

If you are planning to attend the Indiana demonstration or want to stay up to date with the event, join us on Facebook in our #insulin4all Action group.

Elizabeth Rowley is the Director of T1International. She was born in the United States and has lived with type 1 diabetes for more than 25 years. Elizabeth moved to London in 2011 to complete her Master’s degree in International Development at the London School of Economics and Political Science and she founded T​1​International in 2013. T1International’s aim is to unite the diabetes community and advocate for equal access to insulin, diabetes supplies, medical care and education for all people living with type 1 diabetes, no matter where they live. Elizabeth believes that where you were born should not determine whether you live or die with diabetes, and she is confident that by working together we can find long-term solutions.

Spare a Rose, Save a Child.