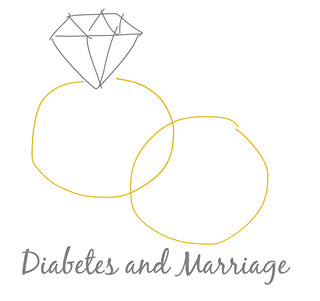 A week or two ago, I received a message from a reader asking about the influence diabetes has on my marriage.  I took to Facebook to get some broader feedback, but the question forced me to drop into the weeds to see how my diabetes touches my marriage.  This will be part one of a two part post, with today’s focus on the people in a relationship who are in a relationship with someone who has diabetes.  Read yesterday’s post here.

As the person in my marriage who hosts diabetes, I struggle to see things from the other side.  Which is why I’m really grateful for the partners of PWD who offered their take on diabetes and marriage, because it’s some great insight on what diabetes looks like “from the other side.”  Whether diabetes was part of the family before the wedding or came into effect after the vows, diabetes can add some intensity to the relationship equation.

Brian “married into diabetes” and shared some thoughts with me. “[My wife] Laura was diagnosed really early in our dating relationship, so it’s something we learned about and have always dealt with together. It certainly tested and proved our bond in the beginning. Now that we’ve been married (almost) six years, it’s simply a part of our lives.  I’d say the biggest struggle for me is that we generally are partners in everything we do. But with diabetes, no matter how supportive I am and how much I try to help, we’re never really partners because it is always hers to deal with. No matter how much we confront it together, she is always facing it alone.”

A female friend who wanted to remain anonymous said, “My husband has had T1D for 25 years and we’ve been married for 9. Diabetes doesn’t necessarily affect our marriage in a tangible way. It’s an underlying current. It’s little things like having to stop for juice 10 minutes into a family road trip, wondering if he’s cranky because he had a bad day or if he’s high or low, or whether the insulin pen he left on the kitchen counter is the long-lasting one or the one he should have taken to work. It’s developing the ability to know if he’s low simply by the look in his eyes. It’s understanding that he always gets low when he mows the lawn. Other than the absolute horror show of having to deal with our insurance, I feel like we do a pretty good job of not letting it affect our everyday life. But we also try to understand that, no matter what, it affects his everyday life.”

Meredith is married to Harry (who has T1D), and they have a daughter close to Birdy’s age.  Meredith said, “It makes me worry. Not just worry about the future, but everyday things. When Harry goes on a business trip or I am away from him at night I worry about low blood sugar. He doesn’t always hear his alarms at night and so I worry about what could happen when I’m not there. I also worry when he works out (which you know is often). If I text and he doesn’t answer or if he’s gone longer then I think he should be my mind almost always goes to BS problems. I still have the regular spouse worries, like normal accidents, but his diabetes adds to that and I’m already a worrier. I think it drives him crazy.”

I’ve thought about this before, the whole “what if it was Chris and not me who had diabetes.”  I know I would nag the absolute shit out of him and would also worry a lot. That’s my role (in life?) – to worry.  And if someone other than me was living with diabetes, I’d worry incessantly about them.  Preferring to have diabetes myself isn’t heroic, but selfish because I’d worry myself into a stupor if it were anyone other than me.

Another woman, who asked to post her comments anonymously, refers to her husband’s diabetes as the third wheel. “We often call [his] diabetes the third wheel in our marriage. It’s always there and challenges our relationship often. [My husband] has a very different demeanor when he’s high, which requires a lot of my patience and to be honest- with two kids under 4, I don’t have any extra patience. So I’m not as kind and forgiving as I should be.”

Sometimes both partners have diabetes, which can add an extra layer of both understanding and of stress.  Kelley was married to someone with type 1 diabetes, and the influence on their relationship was not entirely positive.  She said, “Type 1 very much strained my marriage of 11 years to another type 1. He had hypoglycemia induced seizures along with hypo unawareness. He never wanted to wear his sensor, and it got to the point where I would refuse to leave our sons with him alone for long periods of time. I made sure both of us had insulin and supplies, I made sure our blood work was done, that alcohol wipes and tape were on the shelf where he liked them, and that there were always 2 glucagon pens in the house. I was the one that would argue with him and force feed him glucose gel or tabs, and the one that called 911 if things went too far south for my nursing skills to handle.”

“It caused a lot of resentment and frustration, and made me feel thankful for my own diabetes being easier to manage,” she continued.  “Now that we are divorced, our oldest son has taken on some of the burdens I used to shoulder, and has had a cell phone since the age of 7 to help him with all of this.”

When I was growing up, I didn’t know many other people with diabetes, but in the last 12 years, I’ve made up for lost time.  Which  means I have a lot of “diabetes friends,” which in turn produces a lot of love and a lot of worry.  I’ve never dated someone else with diabetes, but I’ve wondered what that would be like.

Kelley has strong opinions about this.  “I told myself I would never date or marry another type 1 as our marriage began to dissolve. And I have stuck to this. My new partner follows my Dexcom, makes sure I have plenty of insulin in the fridge and fruit snacks and grape glucose tabs in the night stand. I never realized how much I loved being taken care of. I have experienced both ends of the spectrum.”

But it can go either way, as with anything.  By contrast, my friends Chris and Dayle both have type 1, they are married, and they actually met through the diabetes community.  Diabetes is woven around different parts of their relationship, as Chris recounted.

“So do we talk about the dresser devoted exclusively to diabetes supplies?” Chris shared on my Facebook thread.  “The conversations about insurance? The cupcakes? The races to see who finishes their TSA patdowns first? The fact that juice boxes made it into our vows? I think we kinda stacked the deck with both of us having diabetes”

Dayle has a similar outlook, through a lens of humor.  “When Chris and I first met, I was actually dating a different pwd. But he was weird in that he actually changed his lancet for every. Single. BG test. So Christopher was a welcome change.”

Reading through people’s responses really opened my eyes to what it might be like to have diabetes on the other side of my marriage, and made me grateful for the people who live with and love someone with diabetes.  I know that when I’m frustrated with my own diabetes, it’s the steady and calming influence of my husband who keeps me from throwing my meter across the room and watching it shatter into a thousand pieces.

Which is a useful skill, since cats and kids alike might try to eat the little broken meter pieces.

Thank you to everyone who decided to share their thoughts on diabetes and marriage. Your perspectives are valued, appreciated, and comforting.

In Sickness and in Health: I Have Diabetes.

Diabetes Month: The One About Anxiety

Do You Lie to Your Doctor?