This was a search term that brought someone over to SixUntilMe, and I realized they probably didn’t find their answer easily.  I don’t have a pile of “How To” and “Five Ways You Can …” sort of articles, despite the Internet trend in that direction.  (Closest I’ve come is the one about the ten best cocktails for people with diabetes.)  But I wanted to address it.  So …

The act of inserting the needle is one thing.  Years ago, I drew insulin into a syringe from a vial, tapping out the bubbles and then pressing the needle tip to my skin. Thirty years ago, my style was to press the needle through my skin in a slow, deliberate sort of manner, using the speed to gauge whether or not the injection site would hurt (and if it felt uncomfortable at first press, I’d move to a different site).  I still do it this way now, whether it’s a syringe, an insulin pen, or the infusion set for my insulin pump.  Controlling the pain is important to me.  It’s on the short list of things I can control.

The kind of insulin has changed for me throughout the years, as well.  Upon diagnosis in 1986, I took Regular and NPH, which were pretty sluggish and forced me to plan my meals around my morning insulin injection. I’ve also used Lente, UltraLente, Lantus, Levemir, Tresiba, Humalog, and Novolog.  NPH used to be rolled in my mother’s hands so it would mix properly before injection.  Lantus burned when I took it, and the burn would spread under the injection site for a second or two.  I’m currently using Humalog in my pump.  It claims to start working in 15 minutes but my body seems to make that timeline 35 min.

Insulin is serious stuff.  It lowers blood sugars.  Not enough keeps blood glucose levels higher than is safe, subjecting my body to the abuses of elevated sugars.  Too much insulin throws me into a “hypoglycemic event.”  I’ve had a number of low blood sugar episodes that have scared me.  “Scared me” isn’t really a fair description, either, because in some of those moments, I wondered if I was going to die.  Not being dramatic, but more pragmatic.  Will I be able to consume enough glucose to keep me from passing out, going into a coma, dying?  These thoughts sometimes go through my mind like a ticker tape when I’m severely hypoglycemic. 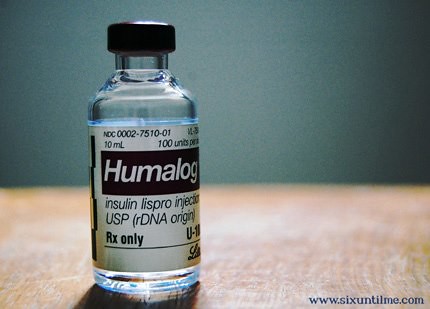 Physically, aside from putting a needle into my body, insulin is crucial to my body’s metabolic processes.  I’d be dead without it.  Dead.  It keeps my body from starving to death.  Acknowledging that is crazy, and gives way to the other side of taking insulin:  the headspace side.

Acknowledging that my ability to stay alive relies on the contents of a small, glass vial is humbling as hell.  The fact that so many people with diabetes cannot afford or access insulin and they die without it is beyond humbling.  Every time I finish a bottle of insulin, I make sure to grab every last bit, waiting for any bubbles to burst and grabbing them when they go liquid.  I do not waste insulin.  A bottle broken against bathroom tile is mourned.  And as the price of insulin continues to climb, my panic response does as well because not having insulin is not an option if I want to continue to exist.

That’s some crazy shit to think about as I tap the bubbles from a syringe.

So what’s it like to take insulin?  Humbling, if I think about how lucky I am to be alive after Banting and Best worked their magic.

But the weird thing is, on most days, I don’t think about it.  This hormone I’d die without, this item in my fridge that’s worth more than my entire house in total, it’s not something I deliberate or celebrate every day.  I just take it, ignoring any quick pinch on my skin and moving on.

… and that right there illustrates how lucky I am.  Which is why I’m ending this post with a call to donate to Life for a Child through IDF.  Nothing like sparing a rose a few months early.

Eye of newt … pill of cinnamon …