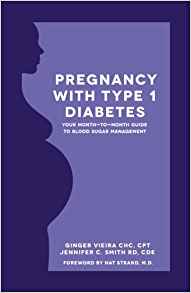 Today is part two of Ginger’s guest blog about the birth of her second little bird (part 1 is here). While this post takes a bit of a dangerous turn, things did work out okay!  (And if you’re a woman with type 1 diabetes who has had babies, is curious about having babies, or wants to read about other people and their babies, check out Ginger’s latest book, Pregnancy with Type 1 Diabetes!)

[Note from Kerri:  This story picks up where yesterday left off, with Ginger just home from the hospital with her newborn.]

… but then…when Violet was 6 days old, I woke up from an afternoon nap to a huge gush of blood rushing from my body and onto my brand new iKea striped duvet cover. (It was only $30 but I adore this duvet!)

“Roger!” I hollered to my husband, “I’m bleeding, we gotta get this duvet in the wash ASAP so it doesn’t stain!”

While he took the precious duvet to the laundry room, I went to the bathroom to clean up the blood only to find that I was still bleeding. Seriously bleeding.

I couldn’t move off the toilet without blood pour out of me and onto the floor. Meanwhile my husband was on the other side of the house with the assumption that the gush of blood was a one-time thing and very busy trying to save my precious iKea bedding.

I jumped into the shower thinking maybe I just needed to wash off thoroughly and let the blood finish…but the blood didn’t stop. It continued to pour from me.

It didn’t take long to realize this wasn’t going to resolve itself at home. Fortunately, our teenage babysitter Mikayla was home and came over within minutes of calling to stay with Lucy.

After filling my sweatpants with wads of paper-towel to contain the bleeding, Roger, Violet and I rushed to the Emergency room that was just 10 miles away at a smaller nearby hospital than where Violet was born.

Between home and this hospital just minutes away, the blood had fill my pants.

I was able to get a good meal of breastmilk into Violet’s belly before I was given anesthesia and taken to the operating room to see what was causing the bleeding. I didn’t know whether I was going to wake up from this operation having had an emergency hysterectomy or something less severe.

When I did wake up from surgery, already back in my room, I suddenly burst into tears.

“Why are you crying?” the doctor asked me.

“I’m just so glad I didn’t have to be cut open again!” I blubbered.

Instead they performed a simple D&C (dilation and curettage).

Apparently, my uterus had stopped properly contracting postpartum to manage healing and bleeding, and the area where the placenta had once been attached looked like a giant open wound. It wasn’t healing properly either so every blood vessel was just gushing with blood.

My uterus was also apparently filled with grape-sized clots of blood. (Why it started nearly 6 days postpartum instead of during my initial hospital stay, nobody knows.)

I’d lost about 3.5 grams of blood in that short span of time between naptime and the hospital. Another gram and I would’ve likely needed a blood transfusion. (I credit this to our awesome babysitter who came over so quickly when we called!)

Of course, I can’t prove that this was related to my feeling during the last few weeks of pregnancy that something was wrong, but for me, it was enough evidence that my uterus has probably had enough of this baby-making adventure.

Today, as I type this, Violet is about 2 months old. She still sleeps 18 to 20 hours a day (which is actually a very recent reduction from her 20 to 22 hours a day). She’s a very good eater and I’ve managed to avoid many breastfeeding-induced lows by keeping my background insulin dose about 1-unit lower than it probably would be otherwise, and taking my normal doses for meals. 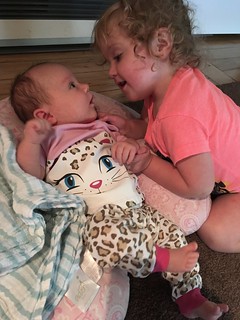 Lucy doesn’t mind Violet’s high-pitched screams during the first few miles of any car-ride, and continues to tell us the baby is cute. The juggling act of two little girls’ needs would make for a good reality show: this morning Lucy pooped on the floor (because she’s potty training)…while Violet was desperately pleading for another meal on the boob…while I was making myself breakfast with the hope of getting us all out the door by 9 a.m. to make a mess at the children’s art studio in town. Don’t worry, I’d already had my cup of coffee!

(It goes without saying that my A1C has definitely popped up from 5.8 to 6.5 percent in these first 8 weeks of Violet’s life!)

Amidst the chaos, we are mostly just grateful, because type 1 diabetes has lost again at its attempt to interfere with real life. This body that can’t even produce a few drips of insulin has now produced two gorgeous little baby girls who are as healthy as any mama could wish for.

Thank you so much, Ginger, for sharing your daughter’s story here.  Congratulations, from one T1D mama to the other!  <3