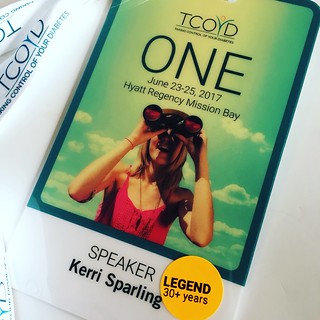 “So what made you want to do the TCOYD ONE conference?” I asked the TCOYD team.

“We were sitting around one day having drinks and just said there is so much stuff coming out in the field of type 1 diabetes that we NEED to put on an event with the absolute best of the best speakers and invite every person with type 1 diabetes around the world who we can get the invite in front of,” said Dr. Steve Edelman, Professor of Medicine at the University of California San Diego and Veterans Affairs Medical Center.  He’s also the founder of Taking Control of Your Diabetes (TCOYD).  “Oh my god, the conference was an incredible weekend of palpable excitement in terms of learning the most up-to-date real information about managing diabetes but also the emotional outpouring was not anticipated or expected. Something I have never experienced in my personal or professional life.”

This is saying a lot, since Steve has been living with type 1 diabetes for almost 50 years.

Tricia Santos Cavaiola, MD and co-director of the TCOYD Type 1 Track, highlighted the differences between ONE and the other TCOYD conferences.  “The biggest difference with this conference was putting more emphasis on living life well with type 1 which is why we tried to make it a retreat in addition to the typical education component. Looking back on this weekend, my favorite part was just seeing how happy everyone was, from walking around the health fair, to huge turnouts at the group activity/exercise sessions, to laughing at the talks, to watching EVERY SINGLE PERSON walking around with a smile on their face. TCOYD conferences always leave me with a ‘feel-good’ feeling at the end, but this one topped them all.

Jeremy Pettus, MD (co-director of the TCOYD Type 1 Track), echoed Steve and Tricia, adding, “I think I’m just proud to have been a part in making it all happen!”

The TCOYD ONE conference that took place last weekend in San Diego, CA was nothing short of amazing.  PWD hanging out, learning from one another, and sharing their diabetes lives without hesitation or judgment is the kind of connection that benefits people’s emotional health as well as their blood sugar numbers.

Nothing leans into “good health” quite like “good friends.”

Ann Ryan Donahue, 46 years into her life with type 1 diabetes, said, “It was clear that this was a dynamic group of T1’s who have all learned to make something positive out of something negative … a room full of progressive, motivated, positive individuals with T1 … and what a great forum to share all the ‘tricks of the trade.’ This may rate as the ‘hungriest group begging for information’ that I’ve ever been a part of.”

I’ll second that completely.  In addition to giving a talk about my 30 plus years with type 1 diabetes, I lead two discussions about the mental/emotional health surrounding the issue of diabetes-related complications.  The stories that were shared in that room can’t be summed up in a blog post or a paragraph.  People were honest, and raw, about what they were dealing with or what they were fearing, and the connections in that room were instant and intense.  I could not be prouder of our community for coming together and talking about where their hopes and fears are rooted.  This is what it’s about for me; connecting with others in efforts to live big, and live well, diabetes be damned.

“It felt so great to be with so many people who understand and know how challenging life is with this condition,” said Julie Forsgren, living with type 1 for over 40 years.  And this was a theme among the attendees, the peer-to-peer connection between PWD.  “I loved how even the doctors and expert speakers were also type 1. It felt SO good to be among others who really get it! The food was a delicious bonus, too. It was so exciting to hear about the developments in improved technology from the CEO’s of the companies working on them. It was an inspiring and informative weekend full of impressive speakers. Such a great feeling of comfort and understanding being among my peers!

“When I looked up in yoga and realized that everyone in that space, at that moment was present with peaceful intentions AND diabetes, it absolutely took my breath away,” said Cynthia Celt, T1D for 20 years, about being part of the yoga group in the morning.  “It was one of the most awestruck diabetes moments I’ve ever experienced. There was no worry of a CGM alarming or the disapproving glances that sometimes accompany a yogi toting her phone into class. It was the first time I have ever felt 100% part of ‘the group’ rather than an outlier.”

Rachel Mercurio hadn’t ever met a person with type 1 diabetes “in the wild” before. “Words cannot adequately describe how incredible this weekend was for me. Before this conference, I didn’t know a soul who had T1 ‘in real life.’ Of course I knew other T1s were out there, but I have always felt like I was alone on an island. Hearing the CGM and pump beeps throughout the weekend was so comforting to hear. Warm, lovely people came up to me and introduced themselves to me. For the first time in my life, I was talking about diabetes without educating anyone about this disease, because you all get it. The presenters are true advocates. I knew this was going to be a great weekend, but I didn’t quite expect an impact of this magnitude.”  (And for the record, I had the honor of meeting Rachel and she’s a force.  And her neon yellow hair is awesome.) 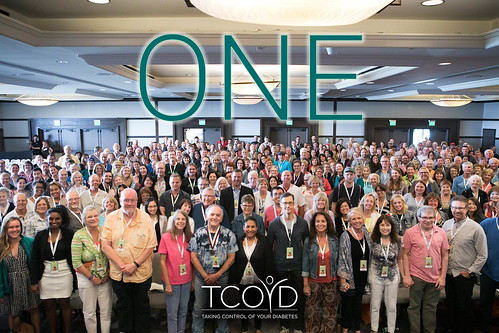 It was called ONE but not because you’re the only one.  You’re ONE of many, and you are not alONE.

Thanks to the TCOYD for hosting this event, to Tandem Diabetes Care for sponsoring my keynote and breakout sessions, and to every person living with diabetes who came to find support, camaraderie, and the other ONEs like them.  See you at the next ONE!!

Looking Back (and Forward): Diabetes Haiku.