Welcome to the continuation of Laddie’s pregnancy story, showing what pregnancy with type 1 diabetes was like back in 1979 and 1982.  Today is a continuation of her story, with details about her sons’ births, the cost of care, and how diabetes did, and didn’t, play a role in bringing her sons into the world.

For more about Laddie’s life with type 1 now, you can visit her blog.  She’s awesome.  🙂

I was diagnosed with diabetes late in 1976 and became pregnant with Mike less than 2 years later. I was referred to the obstetrician down the hall from my internist’s office. I didn’t know to ask for more intensive care and my personality probably would have insisted that I was not “different” from other pregnant women in their mid- 20’s. There were no home BG meters in those days and I was in good health. So I am not exactly sure what would have been done differently.

What are some of my memories? I had “morning” sickness that got worse as the day went on. No puking—just sickening nausea. I was hugely sensitive to smells and barely survived the weeklong visit of my mother who smoked. Although women who suffer from morning sickness are advised to avoid greasy foods, I totally craved Kentucky Fried Chicken and without fail it made me feel better. I remember the clothes: two jumpers, one hunter green and one navy blue, that I alternated daily with different turtlenecks and the horribly-patterned tunic blouse that I wore with beige corduroy pants. Because we didn’t know the sex of our children before birth, I sewed gender-neutral Winnie the Pooh cafe curtains and yellow-checked bumper pads for the old wooden crib that had been my husband’s. Crib safety standards weren’t a big thing in the 1970’s. 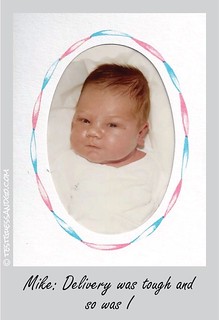 If you want a clue about my birth experience with Mike, just look at his statistics: 11 pounds 11 ounces and 24 inches long. Labor and delivery were hugely painful and towards the end, I received a drug that was magical. Most of the delivery is a blur in my mind but my husband vividly remembers the forceps. We always joke with our grandchildren about the “yankers” used in the Berenstain Bears dentist book to pull out teeth. Well, Mike had the big yankers that pulled him from his warm comfy floating life inside Mom. It took weeks (or months?) for the dent on the side of his head to resolve.

Although I mentioned previously that I only had two glucose tests during my entire hospitalization, Mike had five on the day he was born. I assume that this was to monitor hypoglycemia that is common in babies of moms with “poorly-controlled” diabetes. There were other health concerns that required specialized monitoring, but ultimately Mike was fine. He developed jaundice and required a couple of days under the lights. In today’s world I would have gone home on my third day with daily nursery visiting privileges. Not in 1979. I was asked whether I wanted to stay in the hospital with him and I did for a total of six days. I might argue that for psychological reasons and breast-feeding, it was medically justified …

When I became pregnant in 1981, nobody had learned their lessons from my first pregnancy. Once again I visited the obstetrician down the hall from my internist. Once again I visited my doctor every 6 weeks for a blood test and probably drank a lot of water to dilute the sugar in my pee for Diastix tests. It is only because I know the story of Chris’ delivery that I am appalled that I did not see a high-risk obstetrician during this pregnancy. I am appalled that a C-section wasn’t performed. I am appalled about a lot of things. But I didn’t know any better and I guess my doctors didn’t either. Once again I had no home blood glucose monitoring. My insulin regimen was better than in 1978-79 with the addition of Regular insulin. However, as far as I know the doses were fixed and not an equivalent of today’s MDI (multiple daily injections) regimens.

I remember less about this pregnancy than my first. Probably I was too busy taking care of a 2-year old to pay much attention to routine doctor appointments. I do recall that Mike knew where every bathroom was in the southern suburbs of Minneapolis. “Mom, why do you need to go the bathroom again?”

If you look at the birth weights of my children, you might think that I had better diabetes control during my second pregnancy than my first. Fooled you! Chris was born three weeks early and missed the final weeks of sugar-saturated nutrition that is baby-poison.

Three weeks before my due date, I made a new casserole that had spaghetti sauce, hamburger,  and crescent rolls from the tube. This recipe is not on the list of the Top Ten Meals to have before delivering a baby and I have never made it again. Later in the evening my water broke and off to the hospital we went. My baby book notes indicate that I spent the night at the hospital with light contractions and Dad slept at home.

I did not go into labor and the next morning was given Pitocin to induce contractions. Pitocin labors tend to be “rougher” and ‘harder” than natural labors but I don’t remember whether this labor was worse than my first one. 5-6 hours later Chris was born. Once again, I want to ask: why wasn’t a C-section performed???

I don’t have many memories of Chris’ birth. I remembered the incredible pain of my first delivery but had the confidence that it would be over soon and I just needed to breathe and relax. My husband has the nightmarish memories of the birth of a baby who was delivered and stopped breathing. Chris had broken his collarbone during delivery which is not an uncommon occurrence. Unfortunately the broken clavicle bone pierced his trachea and lung. I don’t remember anything else before hearing from my husband later that Chris was in intensive care at Minneapolis Children’s Hospital and was doing OK. Actually I do not think that I even knew that there had been a problem with the delivery and must have been in some drug-induced stupor.

I recovered quickly from the delivery and 3 days later began the daily commute to Children’s Hospital. I was provided with a tabletop breast pump that I recall weighed a ton and was about a foot square. Chris was amply provided with breast milk through a feeding tube. I’m not sure that there had ever been a baby like Chris in the NICU which is usually filled with tiny 1-4 pound premies. At 10 pounds 3 ounces Chris probably weighed more than the combined weight of the other babies in the unit! He spent 15 days in the hospital on a ventilator as his trachea and lung healed and his lungs matured. In those 2 weeks there were two record-setting snowfalls of 18-24 inches and my memories are of cold and endless 11-mile commutes on slippery snowy back roads.

Chris ended up being fine and 35 years later I continue to give thanks for that. His close call didn’t need to happen. Of course I blame my diabetes for putting him at risk, but I also blame my obstetrician who didn’t perform a C-section based on the history of my first delivery.

I don’t have memories of how diabetes impacted my life once I was home with babies. However, just because I don’t recall anything doesn’t mean it wasn’t hard. If there were lows while nursing, they are lost in the brain frizz of watching soap operas and snippets of TV shows in the middle of the night and never knowing how they turned out. My scary memories of lows with young children are all a few years later when I was driving and I can’t stand to think about that. I didn’t know anyone else with diabetes when I was a young mom and I was very private about it anyway. I think I just ate lifesavers and took my shots. 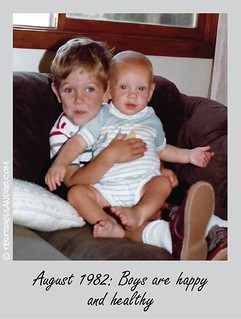 I don’t recall worrying that my children would have diabetes and I don’t think that I ever pressed a Diastix strip into a wet diaper. Diabetes books indicated that the risk was low and without the DOC, I didn’t know any Type 1’s parents with Type 1 children. Also in my family, only my sister and I had diabetes and not my brother. Therefore only girls got T1 and I had boys…. That ignorance used to be bliss, but I now have 4 granddaughters.

I hate diabetes and it tried to rob me of a lot of good things when it came to having children. But it didn’t win. My babies were warriors and I was pretty darn tough also. I rejoice for the great medical care that women with Type 1 diabetes get these days and I admire how incredibly hard these women work throughout their pregnancies. Healthy babies are a prize worth fighting for.

Diabetes Pregnancy: Now and Then.