For years, my love for the One Touch Verio Sync meter knew no limits.  Despite a slightly MS-DOS interface that only showed me one result at a time and didn’t let me scroll back to other results unless I loaded them to the Reveal application, I loved this meter.  It was small, it was accurate (as compared to my Dexcom CGM, which I feel is my personal gold standard), and it was covered my by insurance.

I really liked how it worked with the Reveal app the most, though.  I have always struggled with maintaining a blood sugar logbook, and being able to bluetooth my results to my phone and have them collect in an at-a-glance and also an in-depth data map took the heat off my data angst.

But not everyone loved the Sync.  And recently, it was scrapped and replaced by the Verio Flex meter.

I resisted the Flex mostly because I hate change (<– curmudgeon font), but a few weeks ago, I finally switched over (after putting my two Verio Syncs into a cryptex).  Here are my initial thoughts: 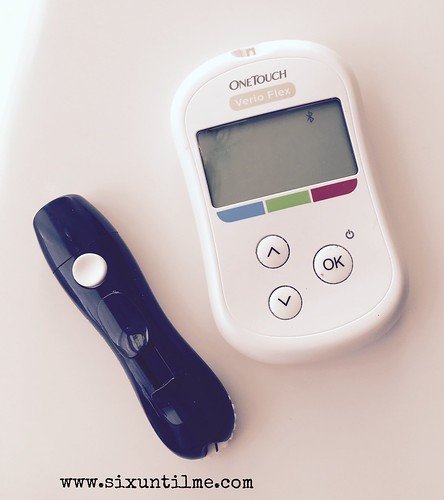 The Verio Flex turns off immediately after you take the test strip out of it.  This is a nice change from the Sync, where it would either have to time out or be pushed off using the button after each blood sugar check.  The auto-off helps conserve battery (more on why that matters in the CONS section).

There’s a small color chart on the bottom of meter screen (on the actual housing of the meter – see picture) where an arrow shows up underneath each BG result to indicate low, high, or in range.  While this isn’t as useful for me because I’m familiar with the ranges recommended for me, this could be a really useful feature for folks newly diagnosed or who aren’t as familiar with in-range and out-of-range.

It comes with a Delica lancing device, which is my favorite, if you can say such a thing about a device meant to pierce skin.

It’s durable and decently priced.  I paid $19.99 for mine at CVS and when it dropped onto the hard kitchen tile that same night, it did not smash to bits.

The battery life doesn’t appear to be awesome.  My glucose meters in the past have taken over a year to burn through a battery, but I’ve already replaced the Flex battery after about a month.  I’m sure the bluetooth transmission cycles the battery quickly, but it was irritating to have to switch out the battery so soon.  I like my t:slim pump because it can be plugged in and charged versus needing to keep a stash of AA batteries, and I liked the Sync for the same reason.

No light!  On the Sync, there was a light at the top of the meter that was bright enough to test in the middle of the night without turning on the lamp.  This was an awesome feature, and I have no idea why it was removed from the Flex, but it’s SORELY MISSED.  Never underestimate the value of a little light that keeps you from putting blood on the strip in a mangled way, wasting the strip.

And the syncing feature takes a while.  I feel like the Sync synced faster while the Flex takes more time to flex its bluetooth muscle.  The way the data maps on the app is identical, so that’s fine, but getting that data there is something I have to remember to do, so every second matters.

Overall, the Flex is similar enough to the Sync that I won’t bust the cryptex back open yet, but hopefully the next iteration will be better on battery, upload automagically to my pump, and the light will return!

On the Wrong Foot