So this week got a little crazy in a slightly unexpected way, with our son arriving a few weeks early via a planned-but-just-not-on-the-day-we-did-it c-section, and I’ve been in the hospital all week re-educating myself on how to care for a newborn and how to recover from surgery.  More on that on Monday, but for now, I wanted to duck in and say Hello! and also to post something that I never got around to posting due to chaotic arrival of our son.

It’s about THE SEA OF TREES, written by Chris Sparling, which is being released theatrically and on video-on-demand today.

Kerri:  We’re doing this again, the whole “you have a movie coming out so I ask you questions that are tangentially related to the movie.”  This time, the film is THE SEA OF TREES.  I put that in all caps because that’s what I’m supposed to do with movie titles, right?

Chris:  Right. And TV shows are in quotes.

Kerri:  I’ve learned so much already.  But I’m also familiar with the storyline of the movie, so can you fill my pancreatically-challenged readers in on what they can expect? 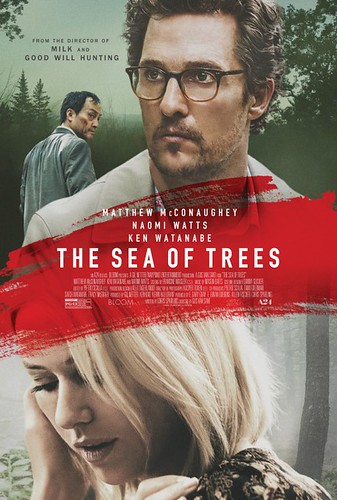 Kerri:  As a writer, you write a lot of stuff.  As an interviewee, you don’t say much.

Chris:  I just told you about using all caps for movies and quotes for TV shows; that’s interesting!

Kerri:  ARGHH in all caps, my love.  Moving back to the movie, can you give me a brief synopsis of THE SEA OF TREES?

Chris:  A man suffers tremendous loss and ends up on a journey of reflection.

Kerri:  It sounds a little heavy.  And also I have read the script so I know that you’re leaving some kind of important stuff out. Like the suicide forest.

Chris:  That’s a real place in Japan; it’s called Aokigahara, which is also known as “The Sea of Trees.”

Kerri:  Okay so now we’re getting somewhere.  So what’s the deal with this forest?

Chris:  It’s also referred to as the perfect place to die.

Kerri:  We’re not going there, right?

Chris:  We have a second kid now; we’re never going anywhere again.  Anyway, for whatever reason, about 100 people or so commit suicide in that forest every year.

Chris:  Well it’s not exactly HONEY I SHRUNK THE KIDS, but it’s definitely not a scary movie, either.  It’s a drama.  It’s a story about a guy whose wife dies, and when he can’t go on anymore, he decides to take his own life.  Only he goes to The Sea of Trees to do it.  But when he gets there, he finds another man who is desperately trying to find his way out of the forest.  In agreeing to help the other man find his way out and survive, the main character undergoes a process of restoration and regains his own will to live.

Kerri:  I’ve been a fan of the script since you first showed it to me several years ago.  [Editor’s note, which is also Wife’s note:  I really loved this script.]  Is this one of your favorite scripts that you’ve written?

Chris:  It is, because it’s a step outside of my usual fare, where most of my stuff is in the thriller genre.  It was nice to do something that was more of a straightforward drama, and I was really grateful to see the script so well-received.

Kerri:  THE SEA OF TREES is a departure from that expectation of “Hey, is Chris creepy in real life?” sort of thing.  Are you becoming less creepy with time, thematically?

Chris:  If I can’t pay the bills with this drama stuff, I’ll go back to being creepy.

Kerri:  No, seriously.  Is this the kind of stuff you prefer to write?

Chris:  Yes and no.  It doesn’t matter to me, too much, what the genre is.  I just want to tell good stories.

Kerri:  So the movie stars Matthew McConaughey, Ken Watanabe, and Naomi Watts.  And your daughter had a chance to meet them, only she was less interested in their celebrity and instead immediately asked where the bathroom was.

Chris:  I remember that day on set.

Kerri:  That wasn’t awkward at all.  And obviously Birdy and I didn’t fly to Japan to bother you on set.  This thing was local-ish.

Chris:  It shot for a week in Japan, but I wasn’t there for any of that.  The rest was shot in various parts of Massachusetts, and I was on set for a lot of those days because I was a producer on the film as well.

Kerri:  Normally, you bust my chops during the course of these interviews.  Why are you being so well-behaved tonight?

Chris:  Because I want to think that I’ve matured a little bit.

Kerri:  I can wholeheartedly attest to the fact that you have not.

Chris:  That’s true.  Did you see my Tweet about the fart festival?

Kerri:  You’re an adult.  With a fancy movie with fancy people in it and …

Chris:  And I had a fancy tuxedo at the premiere at Cannes.

Kerri:  Yeah, but right now you’re not wearing pants, so …

Kerri:  It sounds more interesting if I say you’re not wearing pants.  But anyway, the film comes out very soon.  Like today, soon.

Kerri:  So where can people go to the theater and see it?

Chris:  Opening first in New York and Los Angeles, and then it may expand to other cities.  But people can catch it on Video on Demand and iTunes today as well.

Kerri:  So in the theater and on iTunes on the same day?

Chris:  Yup. It’s a release strategy called Day-and-Date. No idea why it’s called that, but it is. So yeah, it’s essentially available everywhere today.

Kerri:  Is there anything else you’d like to add?

Chris:  Can we watch “Vice Principals” now?  And that should be in quotes because it’s a TV show, not all caps.

Inside Track: Chris and The Atticus Institute.