Stephen Shaul is one of the most insightful – and kindest – people I’ve come across in the last few years, and I really respect his thoughts on all-things diabetes.  (Links to his blog and podcast are in the bio below.)  Today, while I’m en route to 10,000 doctor’s appointments, Stephen is taking over SUM to talk about the simplicity, and the power, of making connections.

“Excuse me, is that a phone there on your belt?”

With just one question and a simple, short answer in a doctor’s office waiting room, a conversation was started between me and a new member of the diabetes community. I put down the publication I was browsing and took a seat next to him.

The man was newly diagnosed, type 2, and had not yet even heard of an insulin pump. He had been diagnosed about ten days earlier by his primary care doctor. Initially, he resisted the idea of going to the hospital. In that moment, he wasn’t sure how to proceed. Everything was so new and so much, he told me. He was there for a follow up appointment. He looked scared. Really scared.

I told him a couple of things that I tell many people with diabetes: that the hardest thing about living with it is the fact that it’s always with you and you can’t walk away from it; and that BG checks and A1c results are just benchmarks… something to base treatment on, but not something to assign self-worth to. I finished up by telling him that there are many resources online to go to for information and support, and that he is not alone in living with a condition that affects 29 million people in the USA and 415 million worldwide.

Well … I found people online telling their stories and engaging with others whenever they had the chance. They made me want to do the same thing. They made me want to help someone newly diagnosed not feel so alone. I actually learned what to say and how to say it from others who have been in similar situations before. I learned the importance of making connections and opening up a brave, new world to someone who didn’t even know that world existed before they met me.

I also remember my diagnosis, how initially I thought I had everything together, and then walked helplessly through life as one awful A1c piled up after another. Let’s face it: if you’ve never been exposed to diabetes, it’s easy to be overwhelmed by the flood of new information (and misinformation) that comes with a new diagnosis. How I wish I had someone then to help me cut through the confusion.

As I was called back to see the doctor, we shook hands, I wished him all the best, and I asked him to call me if he had any additional questions. At the end of our conversation, he seemed more at ease. At least I hope he was. I don’t know.

Diabetes has a way of making us feel isolated, especially in the beginning, when we need reassurance the most. Making connections that support, empower, and foster communications between those living with and affected by diabetes can often be as critical to our health as the insulin and other drugs we take. It only took a minute to welcome a new member to the community. Here’s hoping my new friend finds survival along with comfort, and happiness instead of fear. And though I really hope we could have no more new diagnoses, here’s hoping he can find a way to help if he crosses paths with a new diagnosis in the future. 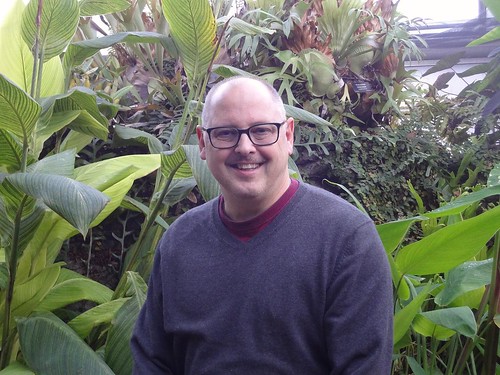 Stephen has been living with Type 1 diabetes since 1991. Since April 2012, he has been writer of the diabetes blog Happy Medium, and since then, has covered a number of diabetes-related subjects, including participation in clinical trials, living a week gluten free as if he were newly diagnosed with celiac disease, and the complex relationship between patients, corporate interests, and government entities.

Since July 2015, he has been host of the Diabetes By The Numbers podcast, where he interviews newsmakers in the diabetes community. He advocates for people with diabetes everywhere through support of legislation designed to reduce the burden and ensure safety of people living with diabetes, and through encouraging others with the phrase “I support you… no conditions.”