Charity Shuster-Gormley is a native Vermonter who currently works as a mental health worker in a psychiatric hospital. She was first diagnosed with type 1 diabetes in the summer of 2000 at 15 years old. Charity holds a Bachelors degree in Psychology and a Masters degree in Marriage and Family Therapy. She lives with her husband, their 6-year-old Dachshund Amos, and 10-year-old cat named Bella, and today she’s taking over SUM to share her thoughts on what it costs to stay alive. 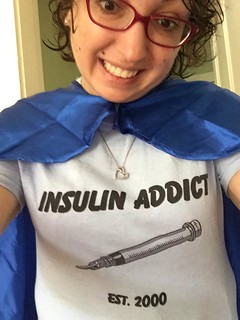 Since the age of 4 I have lived with chronic health conditions. It started with an ear infection at the age of four, which developed into a chronic heart condition called a complete heart block resulting in the need for a pacemaker at the age of 25. At the age of 15, I had corrective surgery for my spine, which had developed serious scoliosis. Five weeks after this surgery, I was in the hospital again being diagnosed with type 1 diabetes.

It was not until about the age of 24 that I started to experience the cost of staying alive, first-hand. Up until then I had been able to stay on my mother’s cushy state health care coverage provided to her as an employee of the state of Vermont and to me up until the age of 24. I knew that my insulin was priced at between 50-100 dollars a vial when I was first diagnosed but until I had to figure out insurance on my own, I had this sense of safety and worry-free mindset and did not think about costs, or how I was going to get supplies.

My first experience a type 1 diabetic with my own insurance was being on Medicaid due to being in college still and the state deeming the insurance my college provided inadequate. There was this great program that was attached to it that I was able to sign up for that provided full coverage for all appointments and supplies that were diabetic related. Then there was the day I received a bill for my testing supplies. I called the insurance inquiring as to why I was being billed for this when it was supposed to be covered at 100%. I was assured by the agent I spoke with that this was indeed an error, and it would be taken care of. I breathed a sigh of relief as the panic of being a full time college student with virtually no income subsided.

Several days later I received a phone call from another agent. They proceeded to inform me that they had spoken with the pharmacy director and that ACTUALLY only insulin and insulin delivery devices were covered under the program I was part of. When I reiterated that this was not was the guidelines of the program stated and asked the reasoning that my testing supplies would not be covered the reply I received was this:  “Testing is not life necessary, ma’am. Only insulin and what is needed to deliver the insulin is.” I was in a state of shock at hearing this. I hung the phone up in stunned silence, still not believing what I had just heard. This was when I first felt the feeling of having to fight for my life.

Today my insulin if I was uninsured is going for $300 a vial. I am working in a psychiatric hospital as a mental health worker and not as a therapist in a mental health agency not only because of my background, but because the insurance I receive here provides me the coverage I need to be able to live. Turning down jobs due to the insurance being so poor or so expensive or both has been a very real reality of mine.

Hearing the CEO of Eli Lilly state that insulin prices are rising due to diabetes being such an expensive disease likely left me looking the closest to Medusa or Broom Hilda that I ever will. My husband turning to me and stating his perception that I am essentially renting my life for approximately $30 a day makes more steam come out of my ears at this thought then Old Faithful produces. Thinking about presidential elections and explaining to others the fact that my life is not just in my hands but in a whole countries who’s biggest concern might not be staying alive … I wake up each day, never giving up hope and faith that the majority of our country desires each and every human to live healthy lives, not having to feel anxious, feel out of control of their health, wonder if they will have what they need to successfully manage their health or have what they need to stay ALIVE. Unification and our voices are a key to the movement towards change I believe.

Our lives are NOT for profit. When you meet a person living with chronic illness ask yourself, “Do I really understand?”