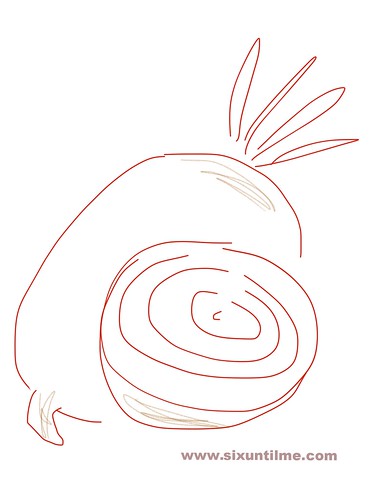 Beets haven’t always been top-of-preference for my palette.  I read somewhere that people either love the taste of beets or think they taste like dirt, and I used to be in the latter camp.  But these days, beets are most desirable and I am looking for a calendar dedicated entirely to them, preferably wearing suspenders … and only suspenders.

Problem is, I had no idea how to cook them and preparing them leaves my kitchen counter looking like a game of Clue.

“It was in the kitchen!  With the carving knife!  And included spinach salad … ?”

But the Internet! This is what it was made for: Googling problems and then solving them with pixel power.  A quick search for “simple beets recipe” on Google images brought me to photos, and then to recipes, that were manageable with my limited kitchen talents.  (I prefer to search by images because if the image looks simple and easy, then the recipe hopefully is as well.  Also, images help me weed out evil food things, like weird, crumbly cheeses.)

Raw beets are what I’m craving, so a simple wash, peel, slice-and-dice plan of attack works perfectly and makes the beets easy to toss into a spinach salad.  I’ve read on several sites that cooking the beets strips away a lot of their power (read: they can’t fly and their x-ray vision goes to shit), but this salad looks awesome and I’m trying this one later today (minus the crispy toast bit).

Desperately, this morning I sliced and ate a beet on top of toast with cream cheese.  Which might read as disgusting and vile, but slap some olives on the side and chase it with a decaf iced coffee and that meal fast becomes a breakfast my pregnant-self craves, while my pre-pregnancy self shudders in the corner and makes faces of disgust.