Michael Park is a composer whose work bridges the gap between real-world and musical experience. His Ted Talk, Experiencing Disease Through Music, has been described as moving, haunting, and an amazing translation of the disease. His opera, Diagnosis: Diabetes has received awards and high praise for turning an otherwise invisible illness into something the audience gets to experience.  And I’m very honored to have Michael guest posting today on SUM, sharing his story.

Five years ago, I reached out to the blogosphere with hopes and dreams as big as the moon. Having just re-read my original guest blog post on SUM, it’s clear I had no idea of the journey I was about to begin. Fast forward to today, and my endeavour to write the world’s first opera about diabetes is somewhat complete. The opera itself has been written, and it even got performed for a modest audience in Vancouver, Canada, but that’s not the end of the road. 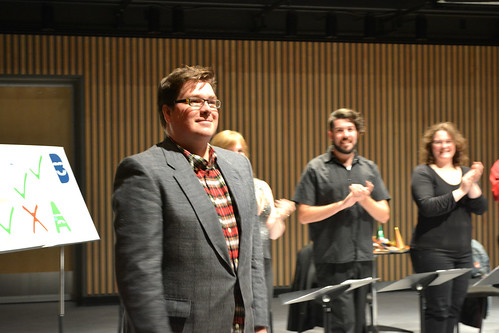 Diagnosis: Diabetes depicts Charlie at several points in his life with diabetes, but it’s also about the audience’s journey. You see, they have to answer questions about diabetes in between scenes, and how well they do dictates whether Charlie experiences the good or the bad version of following scene. As a truly interactive opera, the audience also gets to experience hypoglycemia, by sharing Charlie’s sensations of time slowing down, and not being able to understand some of the words being sung to him.

Another experience I wanted to share with the audience was, in a way, inspired by Kerri and SUM. Years and years ago, I read her description of sitting in the eye doctor’s chair being told she had retinopathy; it was exactly the same experience I had. I built a whole scene around that sensation – that peering into the windows of my soul, someone could be so blind to the thoughts going on in my head.

Putting people in these situations asks a lot of an audience that is probably just expecting to be sung at, but I think it paid off. As if I didn’t know myself, audience members from the premiere worked passionately to convince me that this work needs to be seen by as many people as possible. Believe me, I couldn’t be more on board!

A prominent local politician mentioned how powerful it was for him to see invisible parts of his life as a diabetic portrayed so accurately one stage. My own friends told me that it gave them new insight into a condition they’ve been seeing me deal with for years. I was humbled and forever changed by the woman who told me about how hard she had been on her late father for not taking better care of himself, and how after seeing my opera, she would now grieve for the relationship she could have had with her father, had she only understood him in the way she understood Charlie in his battle with apathy. 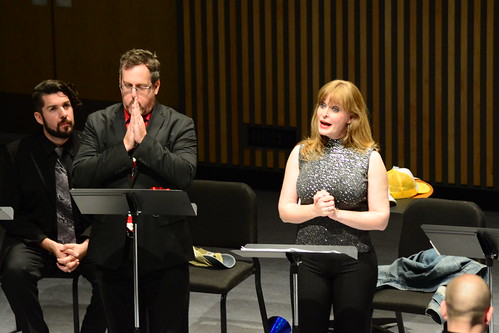 I knew from the get-go that the climax of the opera would be Charlie having to choose between apathetically half-assing his mediocre diabetes management, or sucking it up and making health his top priority. I naively thought that writing this conflict into the opera would magically solve the same issue I had been facing, but, how could I choose Charlie’s fate when I wasn’t willing to choose my own.

It wasn’t magic, but this opera has changed me. That change is coming gradually and in ways I’m only starting to understand. What I do understand is that I can’t stop now. If I trust my audience about how effective it was from a single performance, that’s all the motivation I need to try to get my opera seen by as many people as possible.

Please watch and share this promotional video. Through Diagnosis: Diabetes, I want to bring diabetes to a stage near you. Will that stage be at your local community theatre, or a professional opera house? Will the audience be high school students, or attendees of the next international diabetes conference? These are the questions I need your help answering!