If you were at the ADA Tour De Cure event at Freedom Plaza in Washington DC last September, you might remember this diabetes rant from the drummer:

He’s a group fitness instructor, a public speaker, and has a day job working for the government. And he’s also the drummer for the three-man, DC-based rock band Fellowcraft. Brian Nelson-Palmer is something of a Renaissance man, and he is also a person with type 1 diabetes.

Brian was diagnosed right around his fourth birthday, in 1987, and last night, he let me crash his evening via telephone interview.

“I’m not sure of the exact date, but it was really close to my birthday. I kind of consider it my 4th birthday present,” he said, reminiscing about his diagnosis. “I was going to the bathroom a lot, and I started wetting the bed. My mother suspected some kind of kidney issue, but after visiting the doctor, it turned out to be type 1 diabetes. So I was in the hospital for one night …”

“Wait … you were in the hospital for a night? Just one night?” I felt bad interrupting during an interview, but my diagnosis included not one, but two 12 day hospital stays back in 1986. Did a year between our respective diagnoses make all the difference?

“Yeah, a night, or maybe it was a few nights, wasn’t too many though. I remember hiding under the bed from the nurse. She thought I had run away, but I was just scared of the needles.”

Brian and I talked a lot about that transition from being diagnosed with diabetes as a small kid and growing up to take the reins of this disease from our parents.

“I started taking some care of myself, independently, in first or second grade. I would go to school and no one knew much about diabetes. My mom and dad knew a lot about diabetes, but out in public, I was the only one I knew who had it. My teachers didn’t know how to check my blood sugar or anything like that. So I needed to take care of things on my own,” he said.

“Did you use those old meters?”

“Yeah. Back then, each blood sugar check took two minutes on that old Accu-Chek meter. You had to put the blood on the strip, wait 60 seconds, wipe it off and stick it in the machine, wait another 60 seconds …”

“I remember that one. So you started gaining some diabetes independence in first or second grade. Was there a moment, or are there moments, where you felt that you were starting to assume big parts of your self-care?”

“The day I got an insulin pump was a big moment. I was 16 at the time, back in 1999, and I had one of the first Minimed pumps. I jumped on that bandwagon and I loved the independence. I could go to a friend’s house to sleep over without having to pull out syringes.”

“Did you feel like the syringes earned you some weird looks?” I asked.

“It was more of a desire to be ‘normal.’ Whenever I pulled the needles out, I got attention and I often tried to shy away from that attention. It wasn’t that I hid diabetes. I didn’t mind if my friends saw things I was doing and asked me about it, but I didn’t want it to be a big deal.”

“But music was, and is, a big deal. Talk to me about where the love of music came into play.”

“I’ve been on and off with music my whole life. I was in band through school – played drums from 5th grade all the way through to Florida State. But then I took a break from music. I branched out from drums and tried other activities in college and then graduated and got a ‘real job.’ Twelve years after I put the sticks down, a friend, JR MacDonald, texted me one night and said ‘Hey, I’m starting a band. You in?’ And it went from there. Even with a twelve year hiatus from drums, I picked them up again that night and started right back up. 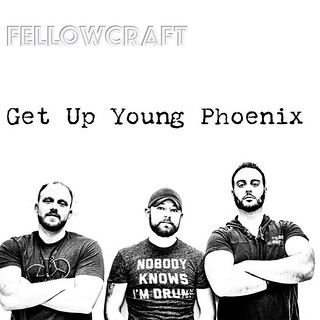 “And that became Fellowcraft.”

When Brian and I connected yesterday morning, he sent me a link to their album, Get Up Young Phoenix, and I spent the day listening to it. Some really good stuff on there.

“We call it rock, it’s really a fusion of blues, funk, and rock together. It’s fun for me because I am formally educated through the public school system in all types of music and percussion. Now, just like back then, I don’t just play square rock beats. Like the song A Thousand Sunsets – it started out as a really slow ballad and we noticed that it did great at one show, but at other shows it became the bathroom break for people, or the moment when people went to get a drink at the bar. It didn’t have the energy and excitement that people seemed to want. In rehearsal the next time, we changed it up and I tried a bossa nova beat. We called it ‘the remix’ for a while, and it quickly became the regular version” He laughed. “My high school band director would be so proud.”

“You’re on stage, playing and doing your job, and diabetes is there in the background the whole time. How has diabetes influenced your experience as a musician?” I asked.

“Diabetes doesn’t affect my life as a musician. That’s the wrong order. It’s about preventative care. I have a Dexcom G5 so I can see where my blood sugar is and where it’s tracking. And when I’m onstage, I can’t check my Dexcom, so I need to start in a good place. The crowd doesn’t see what I’m doing and I don’t want it be part of the show. People come for the music, not for the diabetes.”

“So you wearing a Dexcom and are you also wearing a pump, still?”

“For the pump, I wear the t:slim,” said Brian. “Thanks to some insulin resistance, the 300 u reservoir is necessary and … well, I’m a technology guy. It’s a touch screen, it has a color screen, and it’s faster to input everything. The t:slim takes less time to be a diabetic. That and the Dexcom … their products make it so much easier to be a diabetic and to do what I do.” 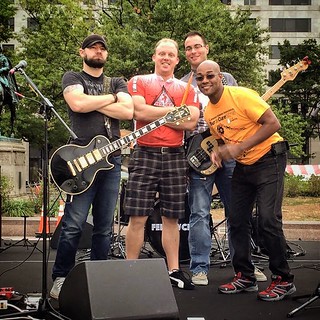 “Thanks for talking with me, Brian. I’m excited to see what’s next from you guys. Any parting words for the diabetes community?”

“It’s not going to stop you,” he said, his voice firm but friendly. “Whatever your goals are for life, you can still achieve them with diabetes. I pursue anything and everything that interests me, which is why I do so much. I consider myself fortunate and lucky to have found two of the best guys, JR Macdonald and Brandon Williams, to pursue my passion for performing music with. If you find that kind of fortune or passion in your life, go for it and don’t look back. Diabetes is a part of you, but it doesn’t define you. You define you.”

Proof positive found in Fellowcraft. To check out more of what Brian and his bandmates are doing, you can visit the Fellowcraft website. Or follow them on Twitter, or through Facebook. And if you’re addicted to Spotify, like me, you can listen there.