I expected the traffic.

That’s a given, driving from southern Rhode Island up to Boston.  Even in the middle of the day, there’s traffic.  Aiming to make it for a 3.30 pm eye dilation appointment at the Joslin eye clinic means leaving at 1.15 pm in order to take the insane drive into account.

But we made it on time, with a whole 15 minutes to spare.  Insurance card provided, copay paid, husband waiting patiently in the waiting room while wife goes inside to have eyeballs dilated and examined.

The eye clinic scares me.  Always has.  There’s a feeling that washes over me every time I step into the waiting room, a sort of empty feeling of being left behind.  The walls are beige and the room they sit patients in while the dilation drops do their job is awash with muted colors and videos from National Geographic that play on repeat with subtitles, even though no one is watching.  Most people are staring in increasingly strange manners at magazines, reading becoming more difficult as the drops take effect. 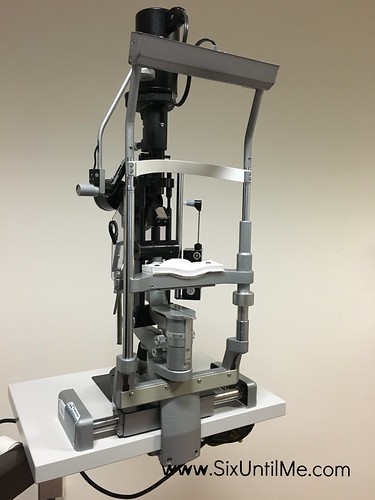 I looked at my phone until the words became too blurry to read.  Before tucking the phone back into my purse, I tried to check my Dexcom result, but couldn’t read the actual number.  I went by the color – gray, which means “in range,” – thinking briefly about what it would be like if the world looked like this all the time, all blurry and weird.

It was a scary thought.  Sometimes the fear of “finding out” keeps me from making appointments on time.

I thought about complications and how we don’t often talk about them, how they’re dangled in front of us like a threat, a manifestation of our (in)abilities to take care of ourselves.  “If you don’t take care of yourself,” with the sentence always ending in a severed limb or a clouded eye.  Discussing complications in this way doesn’t help me follow through on the appointments that are required to screen for different issues, or to track existing ones.  They remain a secret, a whisper, a scarlet letter, something I’m supposed to give in to instead of fight back against.  It’s easy, at times, to reschedule these appointments.

I felt ashamed.  But I expected that, too. I hold my breath sometimes when the doctor is shining that bright light into my eye, blinding me briefly in a moment of irony.

I thought about my diabetes management over the last few months, with corners cut in some places in order to make strides in others.  I hoped my eyeballs reflected my effort.  Or at least that they held steady.

But that’s what happened.

I thought about the things that have gone terribly wrong this year, and the things I wish I could change.  The stress of moments.  The impact that stress has on my blood sugars and my overall health.  The fact that diabetes and I have spent a lot of time together over these past 29 years.  So many variables, so much time, so many opportunities for things to go south.

“See you in a few months.  Your eyes look great.”

I didn’t expect to feel that kind of relief.  I expected to be moody and sullen on the ride home.  Instead, it felt okay to smile.  And to wear sunglasses in the dark, eliciting odd looks from Longwood medical district pedestrians.

Looking in the Windows.

“Instead of mints, we’d get glucose tabs.”