A few weeks ago, I met with Ed Damiano and we spent an afternoon talking about recent developments in the bionic pancreas program and what’s up next.

“Here’s our new device,” he said, placing the iLet on his desk, inadvertently putting it right next to his cell phone, which didn’t look much bigger/thicker by comparison.  (I asked for a quarter for comparison, because otherwise this thing could look as small as a whisper, or as big as a toaster, depending on how you feel about devices that day.) 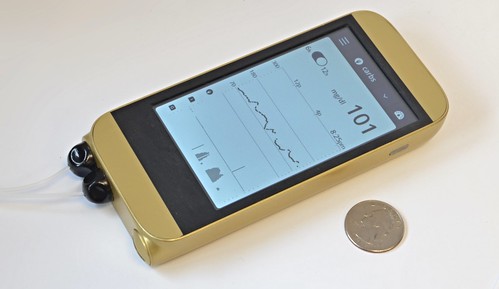 “It’s pretty.  In that device sort of way.  So this is the single device, right?  No more two pumps, one CGM receiver, etc?”

“Yes.  We have two different cartridges in this single device – one for insulin, one for glucagon – that will absolutely not fit in the wrong way.  You can’t make a mistake; there’s no cross-channeling.  The cartridges are already filled, so they aren’t dealing with air bubbles.  There’s no LCD in this device, as that contributes to the bulk, and the e-ink screen [similar to that of an Amazon Kindle] has good contrast and good resolution.  It also has capacitive touch.”

“I’ve seen the older device in action at Clara Barton Camp last summer.  It was amazing to hear what little kids thought about wearing three different devices.  But one device should be easier to tolerate, especially when your blood glucose is in range as a result.  So what’s the next step?  How does this thing go from on your desk to on my hip?”

“The iLet exists because of donations from people who believe in this project.  We want to build the consumable parts of this within the next nine months – that’s the infusion sets, tubing, and caps.  We’re on track to do that if we can get the money raised throughout the end of this year.  1.5 million is our 2015 goal.  The next big goal is to test in clinical trials by the last quarter 2016.”

“Tell me more about the clinical trials?”

“Trials will take place in four different sites, out-patient study that’s several weeks long.  It’s a bridging study that goes from the iPhone-based system to the iLet – helps pave the path final pivotal trial.  The pivotal trial takes us straight to FDA submission.  Each study substantiates and builds confidence between investigators and agencies.”

As a person with diabetes, it’s weird to be reminded of many hands are involved in allowing access to technology development and release into the wild.  And how much money is required.

“Can you show me how far we’ve come?  I saw the new iLet device at Friends for Life this summer, but some perspective would be awesome.  What did the first iteration look like?”

Ed’s team kindly dug back into the archives for this photo, which shows the old laptop-based system attached to a study participant.  (And for another old-school take, you can read Abby’s experience with the clinical trials here and here.) 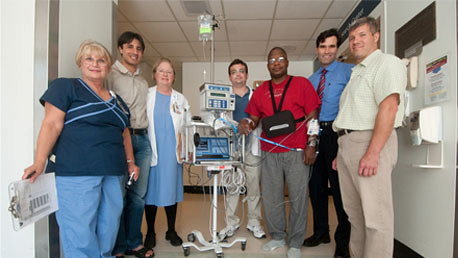 From a team and a laptop and tubes and wires to a single device.  This is the kind of progress that excites me, because it’s happening NOW and the results have already changed lives.  After close to thirty years with diabetes, I’ve seen progress that has made insulin delivery easier and glucose monitoring easier, but the bionic pancreas is a whole new and astounding shift towards life with diabetes.

“And once it’s all said and done, there will be a device similar in look and feel to what I’m using now, only it will be a closed loop.  Which means the pump and the sensor talk to one another, and work with one another independent of my interaction.  Which means I don’t have to think about diabetes nearly as much.  Maybe not much at all,” I said to Chris, all in one breath, when I got home.  “I’m excited.  This is exciting.  I haven’t been this excited in a long, long time about diabetes.”

I believe that the bionic pancreas technology will make my diabetes less of an intrusion, ripping the dangling preposition “with diabetes” off of my life.

To learn more about the bionic pancreas program, please visit the website.  And if you believe in this mission, please consider making a donation to the project.

HCPs and the DOC.