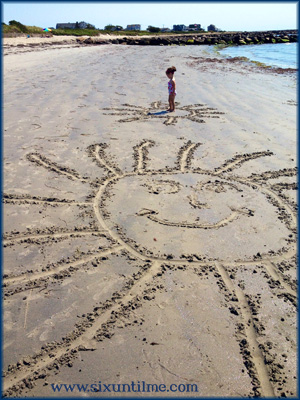 Even though my diabetes diagnosis was twenty-nine years ago today, I feel kind of done with letting it serve as a milestone marker for me.  In years past, I liked marking the day because it felt like a moment of flipping the bird (not this Bird) to diabetes.  Over the last few years, I’ve kind of liked not paying much attention to the anniversary; it was an opportunity to remove the bold underline from diabetes.  Diabetes is something that’s part of my life, but letting it blur my focus isn’t a good head space for me to be in.

Like how my daughter is five and a half years old and she’s a really happy kid.  The smile that spreads across her face when she sees the school bus approach in the morning is my new favorite thing.  That, and watching her walk with a book bag that’s half the size of her body.

[Total aside:  I also really like that, in our neighborhood, the school bus drives in and picked up the kids, goes up the road and through the cul-de-sac, and then drives by us again as it leaves our street.  Which means that the parents stand there and wait for the bus to come back, then we all wave like lunatics.  It’s a very strange custom and one I already find comforting.  (I wonder if the sidewalk group of showered-and-dressed parents eventually devolves into a ragtag pile of bed-headed, bathrobe-wearing, coffee-cup-clutching adults.)]

I like my husband.  So much that I taught our daughter how to write names in the peanut butter.  She thinks it’s a weird custom, but got all excited when given the opportunity to write “LOOPY” in the untouched surface of a new jar.

I like my job.  Living with diabetes can be an intrusion and as I mentioned last year, the intrusion seems to have dulled over time for the most part, but the career and the voice that I’ve had the good fortune to build as a result of this frigging disease is more fulfilling than any other job I could imagine.  I’m looking forward to the chance to meet with my European counterparts in Stockholm next week, and very excited for what’s on tap for 2016.

I like my health.  There are bits and pieces I’d change, if given the chance (see also:  bringing diabetes back after 30 years, mostly because I’ve kept the receipt this whole time), but on the whole, I am extremely lucky to have a disease where I can strongly influence my personal health outcomes.  I am in the driver’s seat, even if I have an unruly passenger.  Despite diabetes, I can still run.  I can still dance (badly).  I can make mistakes.  I can make a difference.  I can still stay out late and laugh hard (resulting sometimes in a snort, which is not cool, body).  I can raise a family.  I can be a crumb.  I can also be a good person.

And I like you guys.  A lot.  Your support and camaraderie has been instrumental over the last decade, and I think I’m in a better mental health place as a result of this community.  Twenty-nine years ago, community was limited to my zip code.  Now, some of my best friends are based in this community, and I’m grateful as eff.  Access to this digital database of truly amazing human beings has been the best thing diabetes has brought to my life, islets down.

So onward, you guys.  ONWARD.  To another year of BYOI(nsulin).