When I do speaking engagements, I get a little nervous about the arrow on my CGM before going on-stage, because a low during a presentation would be less than optimal.   How do you keep your wits when your blood sugar is tanking in front of an audience?  Live television anchors with diabetes know that feeling.  A few years ago, I met Cristina Frank through the #dsma Twitter chat and learned that she brings diabetes to LIVE TV every weekday evening, doing the blood sugar dance before every broadcast.  Cristina Frank is the evening anchor at KSNT News in Topeka Kansas. She anchors the station’s evening newscasts during the week at 5:00p, 5:30p, 6:00p, 9:00p and 10:00p, and today she’s taking the mic here at Six Until Me. 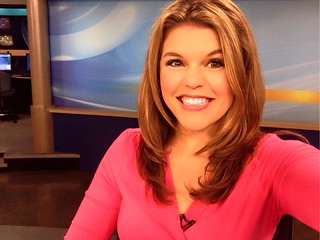 A lot has happened to me on-air. I’ve played basketball with Harlem Globetrotters, reported from the scene of bridge collapse into the Mississippi River, covered severe flooding of upstate New York and even did a creepy ghost hunt in a haunted inn. While all that footage is sitting in news stations’ archives – what hasn’t been captured on tape is my type 1 diabetes.

I was diagnosed when I was 11 years old. So, by the time it came to graduating college and entering the grand ol’ workforce – I had the diabetes basics down pat (or as much as I thought!). Carb counting, insulin ratios – no problem…but now, throw into the mix the stress of breaking news, an unpredictable schedule (covering a ribbon cutting one day to then switching to a downtown fire that you cover overnight), deadlines…and this was a whole new game plan that (9 years into the industry) I’m still trying to navigate.

One of those twists and turns – has been how to handle a low blood sugar on-air. Low blood sugars are already a monster in itself. Now, try throwing that hypoglycemic beast with solo-anchoring a show, bright lights and facing a camera that is broadcasting out to hundreds of thousands of people.

I’m the evening anchor for the NBC/ABC affiliate in Topeka, Kansas. I have a co-anchor – but sometimes I have to solo-anchor some shows. In those moments (and even when my co-anchor is around) I am vigilant about making sure a low doesn’t hit while I am front and center on the newscasts. I test my sugar multiple times before the show. I try to keep my levels in (what I consider) the ‘safe range’ and then I always make sure to keep my meter right by the desk. But, sometimes – diabetes is stubborn and likes to make sure IT has the limelight. 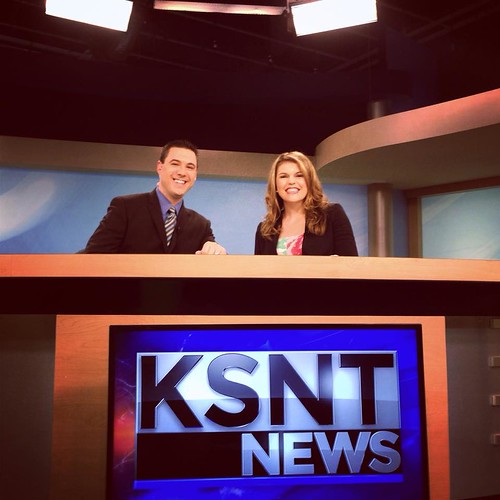 One of those moments happened a night I was solo-anchoring. I felt good. I was walking out to the studio holding onto my pile of hundreds of pages of scripts. I headed to the desk prepped for 90 minutes of news. Back-to-back I was going to one-woman anchor the 5:00p, 5:30p, 6:00p news.

My sugar before show time was a steady 134. I felt confident in that range. The teleprompter was ready to go and keep on track, microphone was clipped on – lets do this!

The 5:00p newscast was cleared….the 5:30pm newscast was solid. One more newscast left. That’s when it hit. I got a little lightheaded (maybe it was just the fact I had talked for an entire hour), I was STARVING (it was almost dinner break anyways), I started to get a bit hot (I am sitting under a plethora of BRIGHT lights). All that reasoning went out the window when I did the no-excuses meter check: 54.

I didn’t have time to run to my desk to get a juice box. The newscast was starting and the news music was right on cue. There was no hiding. There was no, “good evening, northeast Kansas….can you give me 15 minutes to have a juice box?”

Nope. It was game time to power through this. I had to focus. I looked at the prompter (maybe it looked a bit hazy and those words appeared to be dancing around like they were doing the limbo) but I read it the best I could. I knew what stood between me and that fruit juice blend – was 10 stories. If anytime the phrase, “the show must go on” applied – it was here and now.

As soon as we got into the first commercial break – I talked through my microphone to my producer: “Can someone please go to my desk and open the first drawer? I need a juice box in there AS SOON AS POSSIBLE … I’m feeling low.”

Within seconds, a director was already down the hallway to come to my sugar rescue. I had 5 minutes – commercial break + weather forecast. Before the meteorologist had made it back to the anchor desk to cross-talk with me … I was feeling better.

At the end of the show, I asked everyone, “did I seem off?” To them, they couldn’t tell the difference.

When I first went into this industry, I secretly worried having my diabetes out there would be seen as a weakness. Raising questions from employers, co-workers, in the hiring process….is this going to be a negative held against me? This time had once again proven all of those fears and concerns – did not exist.

I am lucky to have always worked in newsrooms where my colleagues have always supported me – and have many times, ran out to a newsroom desk drawer to get me a juice.

Life in a newsroom can be very hectic and ever changing – no two days are ever the same. Throwing type 1 diabetes into that mix can be even a little more challenging. Juice boxes are a staple in my desk drawer. I have a special basal rate I have set with my doctors to make sure my sugars are on-point during a newscast. Even when I was a morning anchor, I had a special basal setting for waking up at 2:30 am (yikes!), being at work at 4am, on-air 5-7am and then going to bed at 6pm.

My producers, co-anchor, news directors, heck – the whole station knows I have type 1 diabetes! Most importantly, the community knows I have diabetes. Kerri was the person who inspired me to put my type 1 diabetes-ness (is that a word?) out there. And that has opened doors.

It’s introduced me to kids, people and families who are all impacted with type 1. I’ve been asked to visit local camps for kids with type 1 diabetes. I’ve met a man who is biking around the country taking part in several JDRF Rides to Cure. I’ve bumped into other type 1’s where I see a “pump in the wild.” Those moments have turned strangers into friends asking about temp basal rates before exercising.

Thank you so much for sharing your story, Cristina, and I am really glad you’ve become such an integral part of the diabetes online community.  Cristina grew up in Massachusetts and is a proud fan of the Boston Red Sox (yay!)!  You can follow her on twitter @CristinaKSNT or on Facebook at facebook.com/cfrankKSNT.