When I was first hospitalized upon diagnosis, I spent two weeks in-patient learning the new and tangled ropes of type 1 diabetes with my parents.  My hospital roommate was a kid named Eddie, who had been bitten by a spider.  The other source of comfort was Kitty.

This grubby thing has been with me since the beginning.  My mom and dad let me pick him out at the toy store to before being admitted to the hospital, and this stuffed animal received as many paw pricks and injections as I did – albeit saline ones – during the course of those two weeks.  Kitty used to have long, fluffy “fur” that became matted and mangy from repeated snuggles.  He has a defined “waist” from me wrapping my little kid arms around him when my blood was being drawn.  You can’t entirely see his eyes, but they are in there, underneath the smushes of fur.

Chris and I moved into a new house a few months ago, and as we were packing, I had a few boxes designated as “important things.”  Those boxes weren’t put into the moving van but instead stayed in my car to keep them safest during the course of all the stuff shuffling.  One box was marked “DIABETES SUPPLIES” and in it I crammed my pump infusion sets, test strips, Dexcom sensors, etc.  And tucked neatly beside a spare glucose meter was Kitty, continuing to secure his VIP place in my diabetes supplies arsenal. 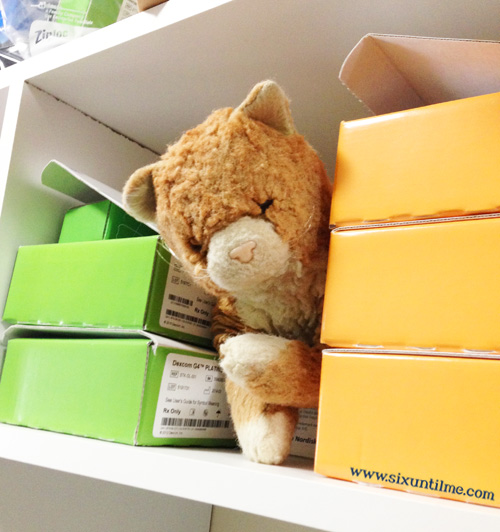 He used to live in my arms, when I was seven.  Then he moved to my shelf in college.  Now he lives in my closet, keeping watch from between boxes of Dexcom sensors.

He’s ancient.  Older than anything else I’ve ever owned.  Some people might think he’s due to be kicked to the curb, weeded out, tossed.

To this, I say, “No effing way.”  I’m planning on playing Uno with my grandkids several decades from now, with Kitty keeping watch from the closet where I’ll keep all my old lady accoutrements*.

This is part of Diabetes Blog Week, where blog prompts help generate a series of posts by folks in the Diabetes Online Community.  Here’s today’s prompt:  “Yesterday we kept stuff in, so today let’s clear stuff out.  What is in your diabetic closet that needs to be cleaned out?  This can be an actual physical belonging, or it can be something you’re mentally or emotionally hanging on to.  Why are you keeping it and why do you need to get rid of it?  (Thank you Rick of RA Diabetes for this topic suggestion.)”

Diabetes on the North Coast Trail