Winter started around November of last year and continued onward with a vengeance until yesterday morning, when “42 degrees and sunny” seemed to constitute as “spring.”  The snow is all but melted (except for a few very stubborn igloos built by resourceful squirrels), so Birdy and I took advantage of the sunshine yesterday to explore our backyard.

We moved house several months ago, just before the winter came crashing in, so we don’t know much about what’s actually outside.  For all we knew, there was a hole that went straight through to Renza’s house.  We did know that there was a shed with a fenced in garden-looking area, and my hope was that it would be useable for a vegetable garden.

So yesterday, my daughter and I went out with our rakes, clippers, and yard refuse bags to find out what was underneath all the pine needles.  After a bit of raking and cleaning up, we saw that the garden was decently set up for planting.

“Good thing!  Because we have all those green beans, Mom!” 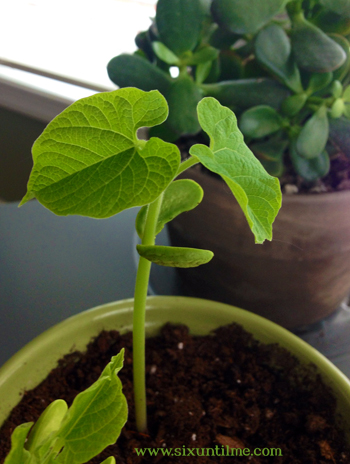 A few weeks ago, she and I took a crack at starting some seedlings in the house, preparing for the eventual moment when Jack Frost would loosen his grip on New England and we could plant our starter garden outside.  We bought one of those seedling trays from Home Depot and with steady preschool hands, my kid planted seed after seed from packets she picked out at the store.  (I didn’t want to stifle her excitement, so we are growing all kinds of stuff – green beans, cucumbers, eggplant, watermelon, carrots, and a woman from the ground.  It’s a festival of greenery.)

Now, several weeks later, the seedlings are starting to sprout.  We moved them to bigger pots so they could become more badass, and in a week or two, we’ll move them outside into the garden.

I’ve always wanted to have a vegetable garden, but needed a partner to help me tend the feeble crop.  (Chris is not a gardener.  He mows the lawn, rakes the leaves, and deals with any snakes/spiders/chupacabra we might stumble upon in the yard, but he’s not into weeding.)  After watching my kid diligently don her gardening gloves and rake, weed, and create impromptu shelters for any worm we came across, I realized I have my vegetable gardening partner now.

Here’s hoping I can go from seed to plate without screwing it up.  But so far, we’re having fun,