I’m late with today’s post, but it’s a good one.  🙂  This afternoon, Chris Snider of A Consequence of Hypoglycemia has contributed a guest post about Symplur and the Spare a Rose, Save a Child campaign.  It’s an in-depth look at how the stats of the #sparearose hashtag campaign influenced the spread of the message.  This post is an interesting peek at where analytics and community passion line up, and where they don’t.  Thanks, Chris, for offering your insight!

I started working with the folks at Symplur at the beginning of this year. My objective was to tell stories and bring the patient community further into the conversation around data – specifically the data they are generating through health conversations on Twitter. After the Spare a Rose campaign concluded, I reached out to Kerri to see if I could help shine a light on the 2-week whirlwind using Symplur’s fancy analytics tool, Signals. I was given four questions to try to address.

1. How did the message spread? Did it reach outside of people with “diabetes” in their profile?
2. What kinds of messages resonated on the whole? Calls to donate, stories about why insulin matters, etc?
3. Did people with small reach still have a big impact because of the close knit nature of the DOC?
4. Can the data prove that every voice does matter?

(1.) What the data says: people associating themselves with diabetes in their screen name, user name, or description represented 43.9% (321) of #sparearose participants, but generated 63.5% (5,825,580) of the impressions. What is difficult to report on is how many of these impressions overlap within the community. How many followers do each of the 43.9% have that are associated with diabetes in one form or another? How many impressions from the other 56.1% were made on people living with or associated by diabetes? It’s difficult to truly parse out where the venn diagram sits, but I think it’s safe to say the diabetes community came strong with their effort to spread the word. This does leave me with some bigger questions to consider for 2016: How might we increase the number of people sharing #sparearose that aren’t immediately associated with diabetes? Should that ratio always favor the diabetes community? How might the appeal of Spare a Rose better resonate with people without diabetes?

(2.) I tried to see what kind of activity was generated around tweets featuring the word ‘donate’ and ‘insulin’ as those are the two biggest subjects related to the Spare a Rose campaign. Every tweet including the word donate included a link to sparearose.org or the subsequent donation page. Similarly, 93% of links including the word insulin included a link to one of those two pages. It makes sense, right? If we’re going to ask people to donate, we need to show them where to go. If we’re going to appeal to the life-saving insulin #sparearose provides, we need to include a link to show people where to go. Looking past the percentages, however, reveals something quite curious. There were over twice as many (2.3x) tweets featuring the word insulin as there were the word donate. What would the final fundraising totals look like if more tweets mentioned the fact that one of the goals of #sparearose is to collect donations? Something to think about, perhaps.

One other stat I noticed was that of all the #sparearose tweets, 67% of the ones that were recorded were Retweets. I wonder what this data would show if more communication about #sparearose was original thought rather than rebroadcasting the words of someone else. To be fair, I’m just as guilty of this as the next person. Sometimes someone else does a better job of saying what I wanted to say and rather than repurpose someone else’s thoughts and words, a simple RT is enough to get the point across. 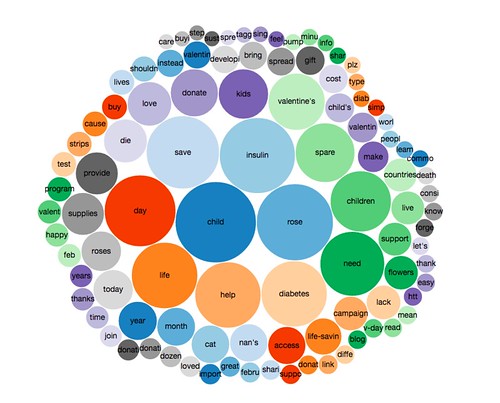 Of all the people participating in #sparearose on Twitter, participants with 945 or fewer followers sent a little over half of the tweets during the reporting period. So, most of the tweets came from people with less than 945 followers, but they generated less than 3% of the impressions? My thoughts on this lead into the final question.

(4.) Do small voices matter? Unfortunately I can’t report on how many links were clicked, whose tweets generated the most clicks to sparearose.org. Crystal Bowersox understands the value of a vial of insulin, but do her 60,000 followers? But, for someone with 150 followers, how many of them are going to acknowledge and engage with a donation ask? It feels cold making all of this a numbers game, but the numbers fascinate me. Is there a point where you have too many followers to trust that any significant percentage will engage with a fundraising ask? How likely will followers outside of the diabetes community donate? Should we, all of us, try to cultivate a following outside of the diabetes community in addition to the relationships we build up among the pancreatically-challenged? Is it a matter of making the right ask or the right number of asks?

So we’re clear, I don’t think it’s the responsibility of the entire diabetes community to think about the nuts and bolts of how all this works. What matters most is the passion to connect with others and help educate whoever will listen to the reality that a little can mean a lot to a child with diabetes. Thanks to people like Kerri, we can make a difference. Even if the numbers from Symplur may suggest otherwise, believe me when I tell you that every voice does matter. Every one of you reading this, telling your story, paving the way for someone else with diabetes to feel safe enough to join our crazy little group, all of us are making a difference.