Thanks to the vision, dedication, and determination of Christel Aprigliano, the first Diabetes UnConference came together in Las Vegas last weekend.

And that’s because there was a social media blackout on the whole conference during the actual course of it.  No live-Tweeting, no live-blogging, no live-streaming.

As my daughter used to say: “nuffin.”

Which is something I admittedly didn’t agree with, at first.

I always view conferences, both professional ones like the American Diabetes Association Scientific Sessions and the more community-based ones like TCOYD and JDRF‘s TypeOneNation, as an enormous privilege to attend.  Travel, lodging, and time for conferences can be a huge barrier to attendance, and as someone who has had channels of support that make it possible for me to attend a lot of meetings throughout the year, I feel like it’s part of my “job” to report back on how things went.  And not in a wicked journalistic sense (because my tendency to curse remains what it is and sometimes I don’t take fastidious notes but instead drink copious amounts of coffee), but in a man-on-the-scene sort of sense, trying to help fill in some of the blanks for people who aren’t able to make that particular meeting.  It’s not right that everyone can’t be everywhere they’d like to be, and the diabetes community is good about paying things forward.

[And yes, this is where my disclosure comes in.  In an effort to open up more of Christel’s conference budget for crucial things like scholarships, etc., Animas was asked to sponsor my attendance as a facilitator, and they thankfully jumped on board.  I’m grateful for my personal and professional relationship with Animas and the support they have shown to me and to the diabetes community as a whole over the past five years.  For more on my relationship with the company, you can read my disclosures.]

But having a social media blackout was a good thing for the UnConference, even though it kept the conference closed.  Why was that good?  Because there was a lot of vulnerability at this conference, and it wasn’t on display for people to comment on, or document, or send out to a slew of social media followers.  Some folks in attendance were meeting fellow people with diabetes for the first time ever, and others were reconnecting and enjoying established relationships.  People talked about how diabetes affected their lives, and the things that made them feel a slate of emotions – guilty, triumphant, and all the ones in between.  To let the discussion flow without feeling the need to document it was a nice change of pace, and personally kept me in the moment.

Which was helpful, because attendees didn’t share all their “sames.”  It wasn’t an exercise in group-think, where people all said they reacted similarly to diabetes scenarios.

For example, when we were talking about burnout, many people shared their personal experiences with diabetes-related burnout, and others said that they haven’t ever experienced burnout.  I thought that was a powerful moment, because while there might be majority opinions on certain topics, the whole point of the diabetes community is that we are strong in what unites us as well as what makes us different.  One size doesn’t fit all, and neither does one emotional response.  I loved these moments because they woke me up and reminded me of the diversity of our experiences.

While I wish there could have been more people in the actual room, I know that access to conferences like this will come in time.  To that same end, half of the people in attendance were people I hadn’t met before.  It wasn’t the “same crew,” which I thought was powerful and helped shake up some of the “same scene, same people” vibe that has a tendency to dominate at a lot of diabetes conferences.  But what really resonated for me is that people felt comfortable and confident during these discussions, and I think the social media “blackout” contributed to that comfort.  Scrutiny was at a minimum and people could concentrate on being present. 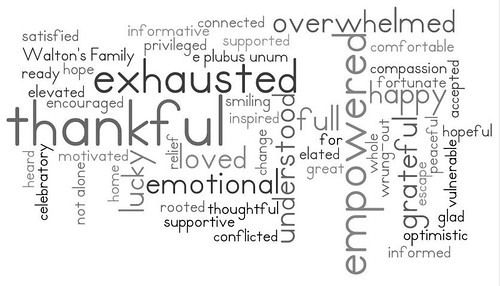 Which is why, at the end of the conference when we were asked to write one word on a 3×5 to describe how we felt about the sessions, the word I wrote was “heard.”

Blog posts about this UnConference might be scarce, but to me that scarcity makes sense.  It was about sharing in the moment, not recapping after the fact.  Maybe, for once, what happens in Vegas stays there in specifics and instead makes it back into the community in the form of increased discussion, support, and connection.

What to Work On.

Oh Rotting, Feeble Pancreas of Mine …