#WeAreNotWaiting: The (Not So?) Brief Story of Tidepool.

Technology has scrambled forward by true leaps and bounds in the last few years, making my Clinitest urinalysis kit of 1986 seem pretty archaic.  Now, people touched by diabetes can see their glucose levels with a flick of their wrist, and there’s more on the horizon as far as data and diabetes management.  Today I’m so happy to have Howard Look, President, CEO and Founder of Tidepool, sharing his personal diabetes story on SUM, talking about why he simply cannot wait.

“Katie, why are you going to the bathroom again?”

Our story is probably familiar: We were on a weekend camping trip and all together in our family-sized tent. Katie, now 14 but 11 at the time, had gotten up THREE TIMES that night, unzipping the tent and wandering with her flashlight to the campground bathroom. The next morning, breakfast was the usual campground fare – several glasses of orange juice and pancakes.

By noon, Katie was throwing up.

It was an exciting time in our family, full of possibility. Katie had just started 6th grade at a new school. She was making new friends, trying out for the softball team, and was ready for new challenges and a new chapter in her life. Who knew. 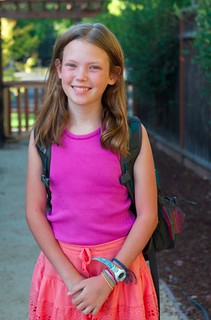 Katie one week before diagnosis. I look at this now and realize how much weight she had lost.

A day later, we were at Lucille Packard Children’s Hospital at Stanford. I just wanted someone to say “Don’t worry, your daughter is not going to die.” I wasn’t so sure. After a sleepless night and a morning full of words we didn’t understand (beta cells, boluses, ketoacidosis…) our heads were spinning. Fortunately, our day-one angel, Jen Block, looked Katie straight in the eye and calmly reassured us: “Katie, I just want you to know that everything is going to be OK. You are going to be fine. I have type 1 diabetes just like you.” Jen showed Katie her insulin pump and explained how she could have the same thing. In Jen, I could see a grown-up Katie. And finally I knew everything was going to be OK.

Like Crawling through Broken Glass
I’m a nerd, a Geek Dad. I’ve lived and worked in Silicon Valley since college and have been really fortunate to be a part of some really cool things: I was on the founding team at TiVo and was VP of Software at Pixar. Just prior to Tidepool I was VP of Software at Amazon.

Like geeks do, I dove in to try to understand what T1D was all about. Katie had mastered computing doses and giving herself shots really quickly (great at math, that’s my girl) and we saw the value in an insulin pump and CGM right away. Within three months, Katie was on a pump and a CGM.

I tried to get us up and running with the software that came with her pump. Bzzzzzt. No sorry, thank you for playing. It won’t work with your browser. OK, you made it work with your browser, but your plugin is out of date. OK, you updated the plugin but BEWARE: it’s an unsigned app that you shouldn’t trust. OK, you are willing to take that risk, but your new computer has USB 3.0 and the USB stick isn’t compatible with that.

Some people wonder why almost no one uploads their pump data… I think I know why: because getting it to work can be like CRAWLING. THROUGH. BROKEN. GLASS. And remember: I’m a software guy, a Geek Dad… I usually LIKE dealing with this stuff. But I found that even if you could get it all to work, the software didn’t provide intuitive, actionable insights.

To make matters worse, Katie didn’t like her first CGM. It hurt to put it in (we called it “the harpoon”) and it wasn’t accurate for her. Fortunately, the Dexcom G4 had just come out, which worked MUCH better. It hurt less and gave readings that were dead-on with her BGM.

I asked myself, over and over:

Why is this so hard? And WHY ISN’T ANYONE DOING ANYTHING ABOUT IT???

Right around that time, fellow Geek Dad, T1D guy and tech blogger Scott Hanselman posted
“The Sad State of Diabetes Technology in 2012”. I was fist pumping and shouting “Yeah! What he said!!!” while reading it. If you scroll halfway down the comments, you’ll see me chiming in:

“… I have a dream that a smart, motivated team of people could create ‘The Mozilla … of Diabetes Technology.’ … What if we … did it in a way the wasn’t constrained by VC funding and sought goodness, not profit?”

Jen also introduced me to Dr. Joyce Lee, who connected me to Dr. Saleh Adi at UCSF, and to Steve McCanne, yet another Geek Dad (or as I called us “D-Dads with Attitudes”). Steve also has a teen daughter with T1D, and had been hacking some code to make it easier for Dr. Adi to review his daughter’s data, all in one place. When I saw what Steve and Dr. Adi and the team at UCSF had put together, I knew it was the start of something beautiful.

#WeAreNotWaiting
Fast forward to now, early 2015. Tidepool has existed for just over a year and a half and I’m really proud of what we’ve accomplished in a very short period of time. As the hashtag says, #WeAreNotWaiting.

In the beginning, we got funded by some very generous donors. That allowed me to hire an amazing team of developers and designers. Six of us have T1D, and two of us have family members with T1D. We like to say “We have pancreas in the game.”

Our mission is simple: Deliver great software that helps reduce the burden of managing T1D.

We’re tackling that mission in a pretty unique way:

Most importantly, we are helping the industry see the value in liberating device data. We’ve made it very clear: We believe that patients own their own health data. People should get to choose what software they want to use to for their diabetes therapy with that data.

We’ve made great progress on the open data front: Asante, Dexcom, Insulet, Tandem and Abbott have all given us their data protocols. We also have great supporters at Animas and Medtronic and they are considering it. We will also implement and support the IEEE 11073 standards for BGMs, CGMs and pumps, which will make it that much easier for device makers to create interoperable products.

What is Tidepool building, and where are we headed?
The Tidepool Platform enables the next wave of diabetes applications. It’s secure, HIPAA-compliant and lets you choose how you want to see and share your data. We hope that it will foster a whole new ecosystem of applications that help reduce the burden of T1D.

The Tidepool Uploader gets data from any diabetes device that has made their device protocol available.  It’s a Chrome Extension, so it works with Macs and PCs (and Linux, too, if you’re a geek like us :). JDRF generously funded development of the Uploader. The project will also make it easier to gather data that will be useful to artificial pancreas researchers. 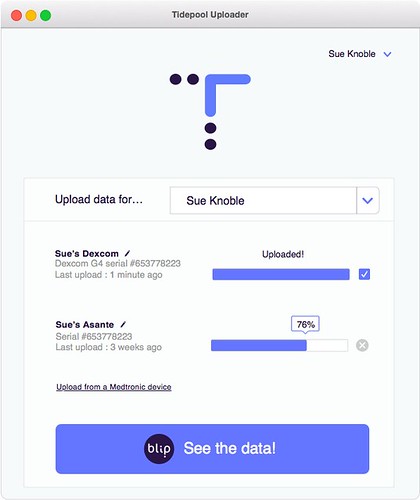 Blip is the home for all of your data. You can see it all in one place. You and the people who support you can use Blip to look, learn and make informed decisions together. Blip is currently being used in a pilot study at UCSF. We’re talking to other clinics like Stanford as well. We hope to have Blip ready for broad testing and deployment in the first half of 2015. 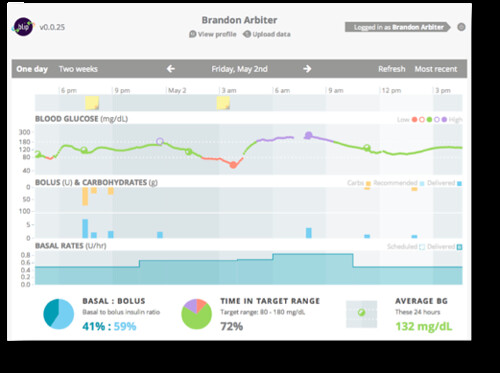 Nutshell is a mobile app that remembers what you ate and ties it together with your diabetes numbers. The next time you order that burrito, you can figure out how much insulin you need with confidence. Nutshell currently exists as a working prototype and we’re looking for funding to take it further.

Going forward, we have lots other projects to tackle:

Which brings us to…

How you can help?
Most importantly, we need your financial support. So far, we’ve had some very generous donors who have supported us. Unfortunately the funding that we have received up to this point is not enough to get us to where we need to be.

The good news is that we have a solid plan to generate just enough revenue to break even and become a self-sustaining non-profit, hopefully by the end of 2015. That means that you can think of your donation as an investment in the future of diabetes technology. There is no financial return on this investment since we are a non-profit, but you will definitely rack up Good Karma.

There are other ways you can help to. If you are a developer, tester or UI designer you can volunteer as a contributor to the project. Join us at https://developer.tidepool.io for more detail. If you have experience with regulatory filings, you can help us with those. It’s a lot of work!

Thanks to Kerri for letting us take the mic for a little while, and to the entire diabetes community for your ongoing support of our efforts.

Howard Look is the founder and CEO of Tidepool, a 501c3 non-profit with the mission of reducing the burden of managing diabetes through technology. Prior to Tidepool, Howard  was on the founder’s team at TiVo where he was VP of Software and User Experience. He was also VP of Software at Pixar, where he led the team developing Pixar’s proprietary film-making system, and at Amazon where he ran a secret software project to develop devices that leverage cloud services. Howard has a BS in Computer Engineering from Carnegie Mellon University. His teenage daughter has T1D.