When I was younger, my pediatric endocrinologist told me that I shouldn’t be poking the syringes into the parts of my skin that didn’t hurt.  “If you don’t feel the pinch of the needle, that means you have scar tissue building up, which can lead to poor absorption of the insulin.”  She stayed on me about rotating injection sites, and even though I didn’t like rotating to new spots that hurt a little, she was right.  The more I rotated, the better my skin felt and fewer egg-bumps of scar tissue formed under my skin.

… shame on me for not following that same rotation protocol when it comes to Dexcom sensors.  I wear mine almost exclusively on my outer thigh because that’s where they feel the best, stay put the best, and are least apt to peel away before their time is up.  For several years, this worked fine because I rotated within the thigh site, making sure not to reuse an area in the same month.  But once the Dexcom adhesive rash started, I was screwed because the skin was taxed not just by the sensor itself, but by the residual rash.

Dexcom rash management has been better lately because of precautionary measures, but sometimes the rash flares up as a result of ten different factors (all ones that itch).  Last week, I was traveling for work and kept applying Opsite Flexifix tape to my Dexcom sensor as it was starting to peel away (and yes, I had a spare sensor on me but still didn’t want to pull the one that was working.  I’m a stubborn human.)  I covered that thing with tape.  And for two days, it was great.  But then it started to turn a little red underneath the tape (not the sensor adhesive, but the skin underneath the tape).  After another day, it went entirely bananas and turned bright red and started to swell.

“I can feel the heat of the infection through my jeans,” I said out loud to Chris.  At which point, I realized I was a frigging idiot for not pulling the sensor off. 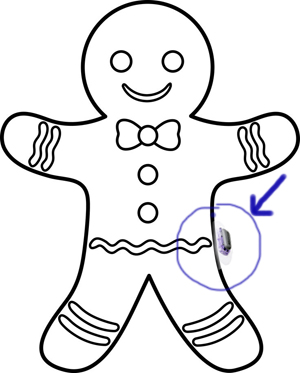 Off it came, and what lurked beneath was gross.  (“It was the worst Dexcom rash … I ever seen!!”  Actual Large Marge quote.)  No way was I going to take a picture for evidence because it was horribly nasty and I’m irresponsible for letting the cost/convenience/reinstallation of the sensor supersede the integrity of my skin.  What was underneath the Toughpad was completely fine, but every bit of skin that had come into contact with the Opsite tape alone was raised, red, and borderline blistering.

It took a week for that site to heal, and only after I carefully applied Neosporin and bandaged to it.  Which brought me to that unfortunate realization:  I suck at rotating my Dexcom sensor sites.  And I need to be better about it, especially since the data is very important to me.

So I’m trying out a new spot in efforts to give my thighs some time to properly heal.  For the last week, I’ve had a sensor on my lower hip and it has worked much better than I thought it would.  It’s just below the belt time on my outer hip (see Gingerbread Man for placement accuracy because holidays) and despite the rub of pants, etc. it is staying put and not peeling up.  I have a little bit of Opsite tape on the lower edge and so far, so good.

I hope this sensor can run its seven day course without leaving a mark.  Because otherwise … itch, please.