Ninety percent of the time, my high blood sugar has an identifiable reason, and there’s a cluster of common causes.  Did I under-estimate the carbs in a snack and therefore under-bolus?  Did I over-treat a low blood sugar?  Did I eat without bolusing at all (it happens)?  Is there a lot of stress floating around that I’m responding to?

Most of the time, those questions cover the why.  Once in a while, my highs are for rogue reasons, like an air bubble in my pump tubing.  Or when I eat something carb-heavy right after an insulin pump site change (it’s like that first bolus doesn’t “catch” somehow).  Or I forgot to reconnect my pump.  Or if the cat bites through my pump tubing.

But rarely, if ever, is one of my high blood sugars the result of bad insulin.

Except it totally happened last week, when two days of bullshit high numbers had me mitigating every possible variable … other than swapping out the insulin itself.  (And clearly I’m stubborn and/or in denial about the quality of my insulin’s influence on my blood sugars?)  I rage-bolused.  I exercised.  I low-carbed the eff out of an entire day.  I did a site change at midnight to take a bite out of the highs.  Nothing.  The downward-sloping arrow on my Dexcom graph had gone on hiatus. 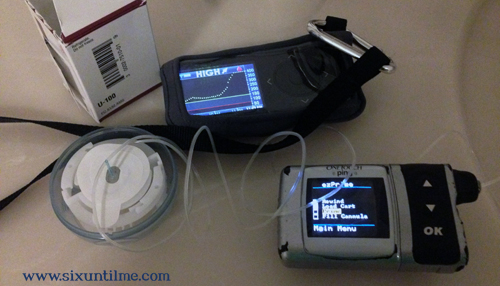 (Always a punched-in-the-gut feeling to see the word HIGH on a Dexcom graph, accompanied by an up arrow.) 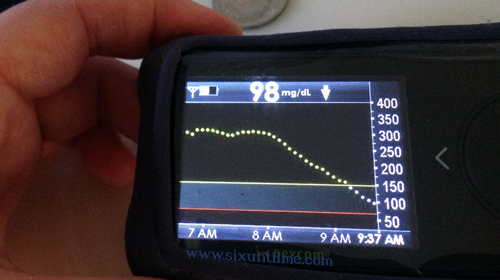 But ditching the bottle of insulin entirely and swapping in a new Humalog vial?  That did the trick in a big way.  For once, it was the insulin.  Next time, it will surely be the cat.

Parenting with Diabetes: Round Two