Remember the little Tamagotchi pets that were creepy/trendy 20 years ago?  (Yes, that was 20 years ago.  I’ll wait while you pluck out the gray hairs.)  As much as I wanted to not give a shit about that weird little egg, I did.  I wanted to press the buttons and feed it, pet it, care for it, and when the little X’s over the eyes popped up because I killed it, I felt like a crumb because I failed at doing the simple tasks required to keep it alive. 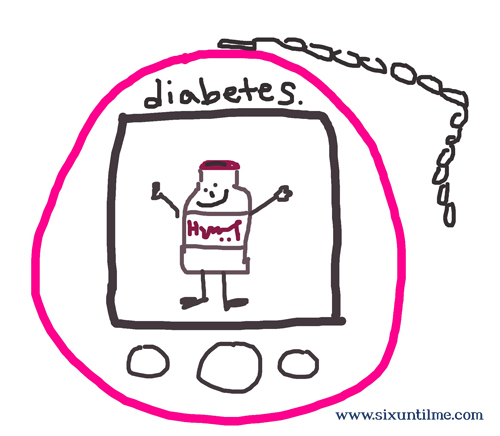 So much of the public perception of life with diabetes is that it runs Tamagotchi-style, a simple matter of pushing the right buttons and following the formula.  But diabetes doesn’t always run within the rules.  If there’s one thing I’ve learned during the last few decades with diabetes, it’s to always hope – hard – for the best but to be prepared for the inevitable hiccups.

Not in a “woe” sort of way, but more like avoiding the “whoa.”

Like this past weekend, when Chris and I took Birdzone to Maine for a few days.  It makes absolutely zero sense to me that a three hour drive would produce lingering low blood sugars, but playing on the beach would give rise (literally) to my Dexcom graph.  Eating the same breakfast two days in a row produced wildly different post-prandial numbers, despite similar fasting blood sugars and insulin doses.  Nothing went foul (fowl, in keeping with the digital chicken theme?) because I was pressed the buttons, fed it, petted it, cared for it, but it was paying it mind instead of “set it and forget it” that kept me between the lines.

“You just take your insulin and avoid sugar, yes?”

Run around and collect things, with the main requirement for success being to stick to the task list?  Dude, I wish.

A Look at Body Posi Betes