Diabetes at the Beach.

Rhode Island has some really nice beaches, and since I was a little kid, going to the beach has been a staple of summer.  (If September doesn’t roll around and your car isn’t lined with beach sand, something went wrong.)

Just after my diagnosis, going to the beach didn’t look or feel any different as far as my body was concerned, because I didn’t use an insulin pump or wear a continuous glucose monitor when I was seven.  The only evidence of diabetes was found in my mother’s beach bag, where my meter was stashed, and in the beach cooler, which grew significantly after my diagnosis (bring all the food and all that meme-ish tomfoolery).

This week, I brought Birdy to the beach to officially kick off our summer (I’m ignoring the fact that it’s 50 degrees and raining today) and since it was early in the season and a little chilly, I decided for a one-piece tank suit instead of a tankini or bikini.  Usually, I wear something two-piece, and not because I am a big fan of baring it all;  I like two-pieces more because there is somewhere to conveniently clip my insulin pump. But once I put on the one-piece bathing suit, I was struck by the lack of clippy real estate.

Finding a place to casually stash my insulin pump in a one-piece bathing suit is damn near impossible. #diabetes 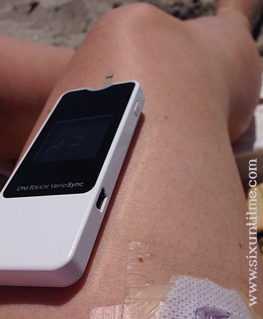 Where the HELL do you put the thing? Normally, I clip it to the bottom half of my bathing suit, just like with regular clothes, but this one-piece business made things more complicated. I could clip it upsidedown to the leg opening, but then it would hang there like a Christmas ornament. I could clip it disco-boobs style, but then it’s like HEY INSULIN PUMP the whole time at the beach.

After much frustration and simultaneous thankfulness for long tubing, I decided to run the tubing along my back, inside of the bathing suit (the infusion set was in the top of my left hip) and clip the pump itself to the back of my suit. It worked because I didn’t sit much (thanks, Birdy), so a bulge clipped on the back of my suit didn’t cause any discomfort.

Pump clipped to the back of my bathing suit, Dexcom sensor taped happily to my thigh, and busting out my glucose meter every so often?  Basically, it was diabetes balls-out on the beach that afternoon.