Thanks to the magic of the Internet and how words can travel from CA to RI by email faster than a sneeze, I’m happy to be hosting a guest post from friend and fellow PWD, Christopher Angell.  (You may remember him from such glucose tabs as GlucoLift and such guest posts as the one about decAY1c.)  Today, he’s writing about the diabetes rules he’s willing to bend and the one he always follows. 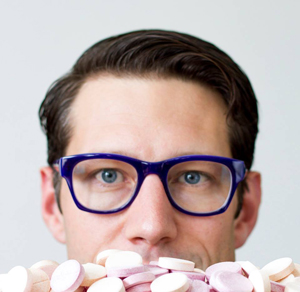 When I was first diagnosed and started my testing and insulin regimen, I did everything by the book. I disinfected test and injection sites with alcohol swabs (no longer recommended). I used a fresh lancet for every finger stick, and I always removed and properly disposed of my pen needles after each injection. I was a model patient (except on those nights when I washed down a giant bowl of popcorn and a chocolate bar with a bottle or so of pinot noir…).

Over time, however, my diligence started to show some cracks. After one too many meals out where I fished out my Humalog pen only to realize I was out of needles, I started leaving my last used needle on, and only changing it right before my next injection, so that worst case, I wouldn’t have to skip dinner or run home and force everyone else to wait while I retrieved my supplies. After using that “emergency needle” one or two times with no adverse effect, I got more and more lenient, until I was only changing a needle when it started to hurt (or required noticeably more force to do its job). Then of course I figured that if needles could be treated like that, lancets certainly could too- they were far less delicate to begin with, since they weren’t hollow.

When I started on a Dexcom CGM, it didn’t take me long to realize that those expensive sensors could have their lives prolonged without consequence as well, and I was regularly getting more than 14 days out them (I still do). Unlike reusing the relatively cheap lancets and needles, that had a real financial advantage. I also quickly learned that I could save my skin some wear and tear by using sites other than the FDA-approved abdomen. In fact, now I can’t remember the last time I wore a sensor there.

Even insulin, I discovered, was often (though not always) good well after its expiration date, or its 30-day window after opening, and subjecting it to a life outside the fridge was usually surprisingly benign.

Now that I’m on a pump, I generally change my cartridge and tubing every 6 days. I still take Lantus as well, and use one needle for the life of each pen, and I’m confident that I will never have to buy another lancet as long as I live (even if I were to live for 1000 years). So to say that I play fast and loose with the usage guidelines of my diabetes devices is to put it mildly. I don’t do it to be stubborn, and generally speaking I don’t do it to save money (though that’s a welcome result). I do it because every second not buying, storing, or changing a lancet, needle, sensor, or pump cartridge is a second that diabetes hasn’t stolen from me, a second that can be spent sleeping, talking, eating, ANYTHING but diabetes-ing. And if I’ve learned anything from living with a chronic disease, it’s that ultimately there are no small things – over time they all add up. Those seconds becomes hours and days over a lifetime with diabetes, so they’re precious to me, and I will only surrender them to diabetes if I truly believe I’m getting something better in return.

Which brings me to the one rule I DO always follow: I never leave an infusion set in longer than three days. Why? Limited real estate. I already kno 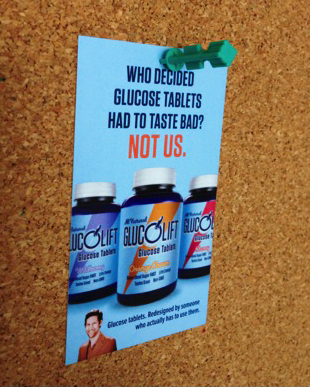 w that prolonged injection/infusion of insulin changes my body, and I can tell the difference between a site that has been in one or two days and one that has been in three. I know that over time, the ability for certain locations to absorb insulin can be compromised, and I know I only have so many locations. I also believe that the next substantial improvement in my treatment will be some version of a dual hormone closed-loop pump (quite possibly Ed Damiano and Steven Russell’s Bionic Pancreas). This means I will need twice as much serviceable tissue to enjoy the full benefit of that treatment. So I’m doing my best to preserve what I have. Spending that time now correlate to very real potential benefits  in the future.

In the meantime, I’ve found other uses for my lancets.