People with diabetes know what people with diabetes want, and John Sjölund is no exception to this rule.  Diagnosed with type 1 diabetes just before he turned four, he has created a simple, streamlined solution to make multiple daily injections easier to manage:  Timesulin. I’ve used his product, and thought of it as “informed MDI’ing.”  Recently, he kicked off an Indiegogo campaign to raise funds to help bring Timesulin to the US market, and today, he’s sharing the how and why of that effort. 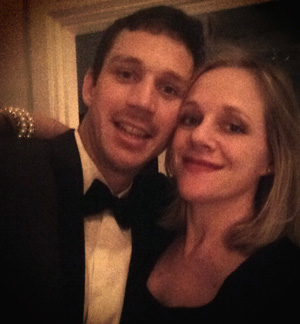 If we haven’t yet had the opportunity to meet, you won’t know that diabetes doesn’t define me. Diabetes has, however, given me a platform to speak to amazing people, to ensure I live healthier than most of my non-D friends and it’s put me on a path to try to make life for all of us around the world with diabetes a little easier. In fact, I have made this my mission!

I have lived with type 1 for 28 years, first diagnosed a couple of days before my fourth birthday. I really have never known a different life to one that consists of 6-10 finger pricks a day, 4-6 insulin injections and constantly checking in with my body to check whether my blood glucose levels are high…or that dreaded low. That said, diabetes has never held me back from leading a life that is full, high-paced and filled with excitement! Kickboxing, triathlons, sky diving or traveling off the beaten path (horseback riding in Lesotho??) …I decide what I want to do and then make adjustments to allow me to do whatever I set my mind to, despite my faulty pancreas.

With this life, however, few things are as routine as taking my four daily insulin shots – one before each meal and a slow-acting injection at bedtime. And maybe it’s because I usually have a thousand things on the go, but over the years I have often caught myself feeling unsure of whether or not I had taken my shot. Do you know that feeling? I would step out of the shower, ready to get to bed and then have that sinking feeling, ‘Ugh…Did I take it, or not?’ or sit down for dinner and then have that niggling worry hit me.

Not having a way of knowing for sure was driving me nuts! The best method I had was to ask my then-girlfriend, Susan (now my wife and pregnant with our twin boys, due any day now!) if she had seen me take my insulin. Too often, we had to resort to the Sniff Test.

Susan has a keen sense of smell and would sniff my belly, legs or arms to see if the smell of insulin was present around the injection site, which was the sign that I had already taken it. After a shower, however, the method was less reliable as the smell of body wash would mask the pungent smell of insulin. The sniff test just wasn’t a fail safe method to see if I had taken my insulin or not, something that 77% of physicians estimate happens as many as six times a month for those of us with diabetes, according to a study done by Novo Nordisk. Also, I tend to take my long-acting insulin in the backside … and Susan often exerted her right to not have to sniff that region in the name of healthy living!

Frustrated with the existing solutions that were available to me from large pharmaceutical brands, I gathered a team, which included my brother Andreas, one of the creators of Skype, to create Timesulin – a smart replacement cap for your existing insulin pen to simply show how much time had passed since the last shot. By having this basic information you can make decisions that will help you avoid an accidental missed or double dose of insulin – which can have very serious effects. Very importantly, we didn’t want Timesulin to incorporate wi-fi, bluetooth or USB plugs or any other mumbo-jumbo that I felt complicated life with diabetes (it’s worth noting that I am a tech junky, know html and CSS, can program, but when it comes to diabetes I believe in the idea of ‘Keeping it simple’). I’m proud to say that we created a product that encompassed all of this – and is today being sold in forty countries around the globe – two years after launching to consumers in February 2012!

As proud as I am on a personal level that our simple solution has helped so many people, I am super frustrated that we haven’t been successful in getting our product to the United States. Why you may ask?

Most importantly, I realized that patients in the United States are not given the same choices about which devices will help them live their best possible life with diabetes. I want to change this.

We just launched a crowdfunding campaign on Indiegogo to help us raise the funds necessary to file for approval from the FDA and help us get Timesulin approved for distribution in the U.S. I am particularly excited about this as it truly lets those of us living with diabetes the ability to vote and decide for ourselves what tools we need. Is Timesulin going to solve everybody’s challenges with diabetes? Of course not, but it can play one small yet important part in allowing people to not be afraid of taking a double dose. Since I couldn’t find a solution that worked for me, I decided to start Timesulin. I have been super frustrated at not being able to empower other people to make that same decision for themselves, and I think that crowdfunding may just have the potential to help us.

This is just the start, we have lots of other ideas that we want to launch, which may not be blockbusters that cure diabetes, but can go a long way, until a cure is reached, in making life with diabetes a little simpler, less complicated and perhaps less scary.

We need your help to get there, and without the support of other people with diabetes, it will be impossible for us to keep innovating.

I know it has made things much easier for myself – and for Susan! – and importantly, we no longer have any of those awkward restaurant moments when it’s a toss up between pulling my shirt up to have her ‘Sniff Test’ my belly and taking the risk of an accidental double dose when I simply feel unsure of whether or not I had already administered my insulin dose. These days I just glance at Timesulin and know.

And now, so can you! Please help us succeed with this campaign and help everyone who’s ever needed a “Sniffer.”

You can follow the Timesulin efforts through their Twitter account, learn more about the product on their website, and you can help support the campaign by visiting their Indiegogo page.  And if your significant other has ever sniffed your skin for insulin, show them this post; they are not alone.

Victoza for T1D: A Few Weeks In.