I’ve used a Dexcom continuous glucose monitor (from the 3-day STS system to the G4 Platinum) since 2006, and the positive influence it has had on my diabetes management and overall quality of life is undeniable.  But as it stands now, when I reach the Medicare age, my coverage for CGM use will be denied.  Susan Berger, an advocate and caregiver for her husband (who has diabetes), is working to change that fact.  Today, Susan is guest posting about why CGM coverage is important, and how we, as a community, can help ensure that coverage.

Marc and I were high school sweethearts.  He was a year ahead of me.  When he graduated, he did a four year stint in the Air Force, 18 months of which were spent overseas in Okinawa.  Two months after he was discharged, we were married.  We lived in California for five years and this is where our daughter was born.   We returned back home to the east coast – Philly to be exact, where we lived for one year before moving to Harrisburg, PA and opening up a Hobby and Craft Shop.  We operated that business for 19 years, working side-by-side daily.  We also had a son during this period.  In 1996 we decided to go in a new direction and opened an Italian Ice and Ice Cream Shop, once again working side-by-side.  It was just a few months after we opened this business that Marc was diagnosed with type 1 diabetes.  What an irony to be in a business where you’re surrounded every single day with sweet ices, creamy ice cream and all types of toppings needed to make sundaes, shakes, etc., and being a diabetic.

His diabetes has impacted us in so many ways, probably too numerous to mention in one blog post.  Before he was fortunate enough to have a continuous glucose monitor (CGM), there were many times when his sugar would plunge downward so rapidly that I would either have to rush to get some juice into him if he was still conscious, or if I couldn’t catch it in time, use the glucagon to revive him.  Once he got a CGM (paid for by private insurance) I would describe our life as becoming pretty normal, practically back to prediabetes.  Much of the worry dissipated because we knew that the warning would go off he his blood sugar dipped too low.  When the CGM stopped working, and Medicare disallowed payment for a new one, life became extremely difficult once again.  We were back to all the fear and worry.

Marc has had some pretty close calls and it’s only either by luck …  or God watching over him that he hasn’t caused harm to either himself or anyone else.  There have been two incidences where he became completely disoriented while driving.  Both times he had been stopped by the police and fortunately for Marc, who makes his living by doing quite a bit of driving, his license wasn’t taken away.  When they realized he was diabetic, EMS was called to revive him and once he became cognizant, he was sent on his way.  Then there have been those times when I’ve had to revive him in the middle of the night.  I have used the glucagon many times over the past 15 years but my hands still shake when I have to give Marc a shot. 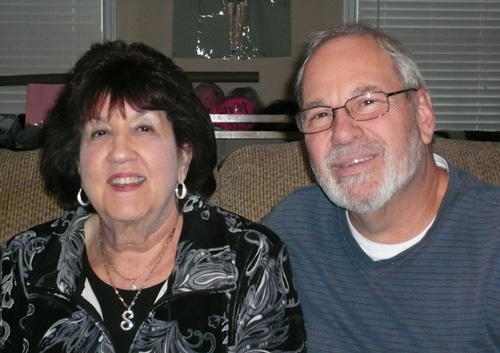 Our children live in Atlanta and I used to be able to visit them on a fairly regular basis, but now, I never leave Marc alone at night.  If he can’t go, then I can’t go.  I missed a wedding in Los Angeles because he couldn’t take the time off.  And I can’t have weekend get-a-ways with the girls because of the fear of leaving him alone at night.

Medicare guidelines do not provide for coverage of Continuous Glucose Monitors. I am an advocate for my husband who desperately needs a new CGM and previously received CGM coverage under private insurance before reaching age 65. I am a crusader for the entire diabetes community, whether you are on Medicare, will soon be on Medicare, have a Continuous Glucose Monitor presently, or might need one in the future. In December 2013 Representative Carol Shea-Porter [D-NH1] introduced a bill into Congress, H.R. 3710: Medicare CGM Coverage Act, which provides for coverage of Continuous Glucose Monitoring Systems by Medicare if recommended by a doctor. My recent post Baby Steps talked about the bill and many members of the Diabetes Online Community (DOC) asked how they could become involved in this crusade. I have just received an email from Congresswoman Shea-Porter’s Legislative Assistant, Marjorie Connolly, and she suggested the following:

There are many diabetics such as my husband who never realized that when they went on Medicare, their CGM would no longer be covered. When the denial for coverage comes, and it inevitably will because Medicare considers the CGM a precautionary device, the arduous journey through the Appeals system is daunting, exhausting and psychologically taxing. The wait for a decision is beyond description and we have waited for 8 months. The entire process will only get harder as baby boomers become Medicare-age in greater numbers. We need to do something about this sooner rather than later. The only way to fight Medicare’s denial of the CGM is to get the guideline changed.

The best thing that we can do now is to let our voices be heard and join with Congresswoman Shea-Porter and her new cosponsor, Congressman Matthew Cartwright [D-PA17] in asking Congress to pass H.R. 3710, the Medicare CGM Coverage Act of 2014. Here is the Sample Letter and a copy of Shea-Porter’s Dear Colleague email blast. Don’t delay because the sponsors of this bill have begun their full-on push for support and every voice is important. If you are a fellow advocate and want to know how to help, click to download this document.

Please leave a comment on this post or email me [email in the advocate letter] if I can assist you in any way. You don’t have to be a person with diabetes to write the letter. You can be the son, daughter, mother, father, friend or as myself, the spouse of a diabetic. Please do this for all of those who so desperately need a CGM and can’t afford to pay for it out of pocket.

I love my husband and want him to be around for along time.  This is the reason why I became an advocate.  But just as important, in the time that I have been blogging, I have met many men and women who like Marc need a CGM and can’t afford to pay for the device and the sensors out of pocket.  And I have also been contacted by many who are worried that when their time comes to go into the Medicare system, they will experience what we are experiencing now.  I know that together we can make sure that Congress hears our voices and supports H.R. 3710.

Thank you, Sue, for speaking up on behalf of PWD.  (And for more on this issue, check out Kim’s post at Texting My Pancreas, and look through these discussions on TuDiabetes about CGM and Medicare coverage and on the ADA website.)

t:slim with a Twist.