“I explained what you were doing to my daughter, the whole running across Canada thing, and she stopped what she was doing, looked me right in the eye, and said, ‘Why is he doing that?'”

“So that’s the question I’m opening with – why are you doing this?  Why are you running across Canada?”

“I’m taking this on because I want to inspire people to live life to the fullest.  I want to make it impossible for people with diabetes in Canada not to know about this run, or to be inspired by it.  And I want them to feel like they own this project and they can be part of it.” 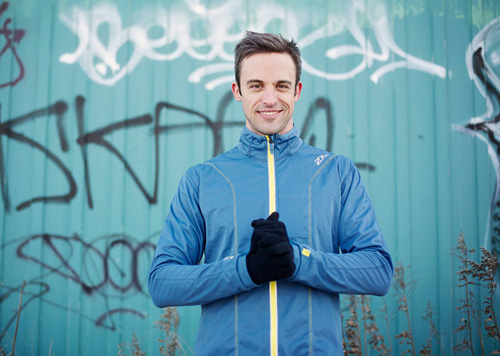 Sébastien Sasseville was diagnosed with type 1 diabetes in 2002 and since, he’s become the first Canadian with type 1 diabetes to summit Everest, and has also competed in the Sahara Race in Egypt, a 250km self-supported ultra-marathon.  And now Seb is running across Canada.  On purpose, and with purpose.  He leaves this morning (February 2nd) from St John’s, Newfoundland and the goal is to arrive in Vancouver, British Columbia on November 14th (nice timing, diabetes advocate guy).  7,500 kilometers (4,600 miles) in nine month’s time.

“Leaving in February?  I know it’s Canada, but isn’t that a rough time to set out, even for a Canadian?”

“It was always going to take about nine months to accomplish this goal,” Seb said, “and in Canada, you can’t avoid winter for more than a few months.  No matter what, there was going to be snow.  My team and I decided to let the arrival dictate departure.  I wanted to end my run on World Diabetes Day, which meant a February start.”

To bring his type 1 diabetes on this journey, Seb has a few tricks up his sleeve, in addition to the support of his sponsors and his team.

“When possible, I want to split my running into segments during the day.  I’ll run for 2 – 3 hours in the morning, take a break, and then do it again in the afternoon.  I expect my insulin needs to go down about 50% overall, because you become so sensitive to insulin with the consistent exercise.  But my greatest asset will be the pick up truck filled with my diabetes gear.  You know all the stuff we have to bring everywhere with us, at all times?  I’ll have a car behind me at all times, filled with supplies.”

Diabetes-gear wise, Seb will be suited up with the Animas Vibe with Dexcom G4 Platinum CGM, checking his blood sugar on a Verio IQ, with the support of Novo Nordisk, as well.  But what about the low blood sugars that surely crop up during nine months of daily marathons?

“My low glucose treatments change all the time – so long as I know it can save my butt, I don’t care what it is.  I’m not eating those carbs because they taste good, but because they bring my blood sugars up.  I like the gels, sports drinks, and lately, I have to admit – I’ve been chugging maple syrup.”

“Wow.  That’s very Canadian of you!  Please tell me you keep it in a flask on your belt.”

“What is the message you are trying to send to people with diabetes?  Aside from suggest hip flasks of maple syrup?  What’s the takeaway for people who are cheering you on as you make this amazing journey?”  I asked.

“My goal is to inspire people to live their lives to the fullest, no matter what obstacles they face.  There are people with diabetes who think that it’s a limitation and that life sucks,” he said.   “A friend of mine told me that his girlfriend has type 1, and she heard about what I was doing, and she said, ‘What that guy does is not normal.”  You know, like I know, that this doesn’t come easy, and it requires emotional work, and physical work.  Managing diabetes doesn’t happen magically.  It’s just work.  It takes work.  But it’s a lot more fun to feel good about diabetes than to feel bad about it.  That sounds way too simple, right?  But it’s so complex and so simple at the same time.”

“I used to suck so bad at sports.  I don’t have natural athletic abilities,” Seb admitted, which made me laugh because, really?  “I remember the first time I went running after being diagnosed, I went 250 meters and said, ‘Okay, that sucked.  I sucked at it.’ But the things like marathons and triathlons?  That stuff isn’t done by superhumans.  It’s done by people.  It’s 99% work and very little actual talent. It’s about persistence, and determination, and I strongly believe that this kind of stuff can be done by anyone.”

“But what if I don’t want to run across Canada?  What if my goals are different from your goals?  Does the same ‘achieve anything’ apply outside of athleticism?”

“I love that question.”  He paused, and I tried to figure out if he was taking the piss out of me.  “I really do.  What’s important is to find what is going to make you happy.  It doesn’t have to be an athletic feat.  But it has to be something that makes you grow.  And to find that something is so important.  That’s why I say that I wouldn’t ever give diabetes back because it’s become a tool for personal growth.  Not because I like pricking my finger – I would give that back in a heartbeat.”

“So you would keep diabetes not for the medical nonsense but for what it’s taught you?”

“Is there a specific hashtag we should follow?” I asked.

“I’m trying to use a lot of inspirational messages, because that’s what I want this to be.  Hashtags like #outrundiabetes, or #canadaruns are good places to start. Or #beingchasedbyabear,” Seb assured me.

“Better than #caughtbyabear,” I said.

“I’m going to try and keep it interesting.  Be on the lookout for me, in a bunny suit, running across Canada on Easter morning,” he said.

If I Knew Then: Diabetes Blogging.

“Do you wish you didn’t have diabetes?”