Diet and Food By Kerri December 13, 2013 Tags: but damn girl, cake, cooking, gluten-free, holidays, I am a horrendous cook, I can bake, Nutella, recipe 2 Comments

Today is Cookie Day, as my mother is coming over and she, Birdy, and I are going to bake the hell out of some cookies.  (My mission is to make these and have them end up delicious.)  In keeping with the baking theme, and in time for the holiday gluttonous rush, I wanted to re-share a recipe for gluten-free Nutella and chocolate cake, because it was mighty tasty.

In keeping with the “all I can cook are things I shouldn’t eat” theme, I made a flourless chocolate cake with Nutella for my mother-in-law’s birthday party.  Chocolate-y goodness AND gluten-free!

The recipe is from this fantastic site that has wonderful editorial and pictures, but I’ll be damned if the ingredients aren’t measured in grams, making my almost-comatose inner mathematician completely unresponsive.  But I did it, and if I can do it, so can you. 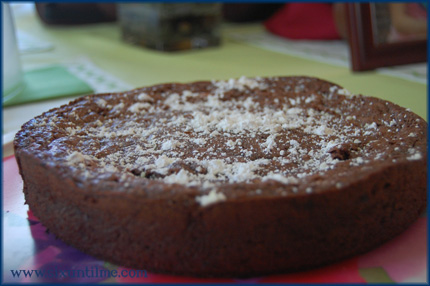 Original recipe found here.
Ingredients (and I apologize for the grams thing.  Just use a converter.  Or guess.)

Anything made with Nutella works for me.  But beware – this stuff is like insulin’s Kryptonite.  … or maybe that’s just diabetes.

In the KNOW … Foods.