Blood sugar excursions are one thing (little trips to the grocery store, short flights to Canada … those sorts of excursions are fine) but the long-haul ones are not okay (BOS -> MEL).  I can deal with a sticky high of 180 or 200 mg/dL without getting fired up, and lows are less frequent these days, so I’m not as irritated by them.  Issues seem weekly rather than daily, which is a lovely change of pace.

The day began with a low alarm in the morning – not a deep one, but a shallow low, easily managed by turning down my basal rate for 45 minutes and popping one glucose tab.  Before breakfast I was 107 mg/dL.  After breakfast, I was 302 mg/dL.  The eff?  I have a breakfast bolus recorded in my pump, but it clearly didn’t make a dent (either that, or the stress of the morning sent me cruising up into orbit).  My goal of bringing my blood sugar down within a few hours was thwarted by a thorough combination of a bloody infusion set (was that why my breakfast bolus didn’t register?), insulin that may have been borked (my pump cartridge was a potluck of dregs from older bottles), the regular stress of work coupled with exacerbated stress of having a high blood sugar … it was gross. 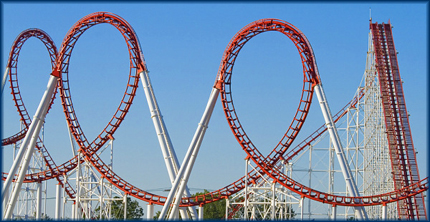 It wasn’t until about 2 pm that I was back down to the 200’s, and that was after pulling the infusion site and taking an injection.  And it wasn’t until about 3 pm that I saw a number under 100 mg/dL.  Which started the second half of my day, spent trying to bring up a low blood sugar that wanted its own bedroom.  I bounced between highs and lows for hours, not able to properly correct at either end of the spectrum due to a magical combination of user error and pancreas error.

When I looked at my Dexcom graph last night, it was way too much ketchup and mustard (aka “highs and lows”) and not nearly enough time spent in range.

A normal day with diabetes doesn’t wring me out, but yesterday did.  Concentrating on work was really difficult, because my high-brain was too sluggish and too thick to let synapses fire.   Writing was impossible.  Sitting at my desk for more than twenty minutes was impossible because I kept having to take breaks to get more water and then to pee.  (I went for a run and a mile and a half into it, made the wise decision to turn around.  A good idea since, by the time I got back to my car, the need to pee was amazingly all-consuming.  Oh hydration!)  My whole body felt like it was submerged in Jell-O, and I tried to swim through it for the majority of the morning.  Instead of making beds/doing laundry/cleaning dishes/writing/answering emails/phone calls, I wanted to climb into bed and sleep off the blood sugar hangover, but that wasn’t an option.  Life doesn’t wait for diabetes.

I made lots of mistakes yesterday – should have pulled the site/taken an injection earlier, should have assumed my blood sugar would rise more after turning down the basal, should have checked an hour after eating instead of two.  So many things I should have done, or done differently.  But my brain isn’t very clever when it’s on the glucose roller coaster.

This morning, my fasting blood sugar was 104 mg/dL, a welcomed change after yesterday’s 398 mg/dL, 42 mg/dL, and all the numbers in between.

“Don’t mock me, you little jerkface,” I said to my meter.

If the frigging thing had a tongue to stick out, it would have.

Looking Back: Diabetes Back in the Day.