On Being An Athlete.

If this was college, and it was the night before the paper was due, I’d grab a dictionary and start feverishly typing the following:  “Webster’s dictionary defines ‘athlete’ as ‘a person who is trained or skilled in exercises, sports, or games requiring physical strength, agility, or stamina.  Middle English, from Latin athleta, from Greek athlētēs, from athlein to contend for a prize, from athlon prize, contest.”

(Let’s pretend it’s college, because I like that opener.)

Athletes, and the definition of who or what an athlete is has been on my mind for the last few days, especially after serving as co-host for the Insulindependence Greatest Awards Show in Diabetes.  Sebastien Sasseville and I had the honor (and the fun experience) of MC’ing the awards show from the House of Blues in San Diego on Saturday night.  The greatest honor that night, for me, was being able to announce Scott Johnson as the winner of this year’s Athletic Achievement Award, voted for by members of the diabetes community.   Scott, for me, is the EWD (Everyman With Diabetes).  His good days are good.  His tough days are combination of frustration and exhaustion.  But he keeps pushing, and keeps trying, and his daily journey is our daily journey, as people with diabetes.  He keeps his eye on the prize:  health.

That’s the part of the definition of “athlete” that really resonates for me, the etymology of the word.  “To contend for a prize.”

That is what I strive for, as a person with diabetes – the prize of a life that, whether hard-earned or thankfully easy, is healthy, fun, and worthwhile.  So many of us may never achieve, or want to achieve, the prize of being a world-class athlete, but every single one of us can be inspired to exercise and be healthy.  You don’t have to go up Everest (even though – good for you, crazy Seb), but you do have to move.  Go for a walk.  Dance in your kitchen.  Take the stairs instead of the elevator whenever possible.  MOVE YOUR BODY, even if you’re intimidated.

Be an athlete in pursuit of the prize of life.  We can all be that athlete.

Sounds a little cheesy?  Yes, indeed – straight-up gouda.  But sometimes the simplest things are what can make the biggest difference.  For the last few weeks, I’ve had trouble fitting regular exercise into the mix (more on that later), and I’m feeling the effects of being so dormant.  My blood sugars are harder to control, my body feels tired, and my brain feels slower on the uptake than usual.  Exercise might not be as  crucial a component in my diabetes toolbox as insulin, but it’s up there.  Tapping my inner athlete helps keep me healthy.  And seeing people in this community who are doing impressive things, great things, and consistent things motivates the hell out of me.

Congrats to Scott, and all of the other nominees and winners on Saturday night, for inspiring people with diabetes to remain in hot pursuit of that prize. 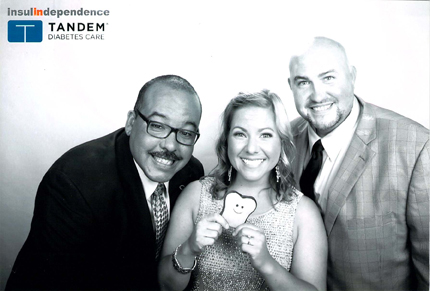 George Simmons, me, the little piece of fake bread that Birdy asked me to bring on my trip, and WINNAH Scott K. Johnson

Be An Athlete: Redux.

You CAN Do This