At first, I was all indignant about the fact that diabetes was portrayed as a monster in this app.

“I can’t hate it!  Or fear it, right?  That makes it a tumbleweed of psychosocial turmoil, doesn’t it?”

In efforts to truly test the app, I went all in and embraced the monster.  Which is why I’ve spent the last few weeks playing with the mySugr app, developed by a team of PWDs in Austria. One of the team members, Fredrick Debong, and I had the opportunity to hang out again last week at Doctors 2.0 & You, and I remain impressed with his approach.  It was refreshing to see a long-time T1D’er (dx’d at the age of four) taking on his disease in a very new, very inspiring way.  Regarding mySugr, Fredrik offered, “With the mySugr Companion, we turn diabetes therapy and logging, a normally tedious chore, into something exciting! My personal inspiration for the app is based on my own life with diabetes – now approaching 30 years, which also include a three-year stint of diabetes burnout. If the mySugr Companion can make us smile while pricking our fingers, take pleasure in our small daily victories and feel the progress we make, then we change our world for the better.”

I’m all about small victories.  Let’s dive in!

Per the set up instructions, you’re encouraged to name the monster, so I went with the current arch nemesis in our home:  Norman Price.  (If you’re not hip to Fireman Sam, Norman Price is this little jerkface who lives in the town of Pontypandy and seemingly lights everything in a fifteen mile radius on fire.  He’s good for keeping the firemen busy, but life would be much smoother if Norman Price was shipped out to sea.  Hence, Norman Price became my diabetes monster.)

After filling out the settings tab (offering up information like “on an insulin pump,” “measuring blood units in mg/dL,” “carbs measured in grams,” and setting the hypo and hyper thresholds), I was ready to roll.  And still a little skeptical, because I’m wary of most apps.  I wonder how long the quantified self apps can hold my attention (even though, in full disclosure, I have been using the RunKeeper app since last November).

Inputting data on this application is easy, and graceful, not a clumsy casino game-esque scroll bar or a tangled web of things you need to click on.  Hit the plus sign, enter the glucose value, and any other details you want to make note of.  The one line that didn’t make it into the screenshot here was “Notes,” which to me is the best line ever:  an open field to put in whatever you’re feeling.  There were several open field note options throughout this app, which is brilliant because, try as they might, app developers cannot make a drop-down menu long enough to cover all the different variables that impact diabetes management.

I also liked how there were some standard, and cleverly illustrated, “tags” you could use for data input:

Each data point logged, and tag added, and note noted, earns “points” for the user, which are tracked on the home screen.  I find logbooking to be tedious and boring and lacking any/all incentive (because the reward for good behavior is … to do it all over again?), so even simply  seeing a point value climbing as a result of my efforts to stay on top of things makes enough of a difference to keep me attempting to earn.

I’m only experimenting with the standard version right now, but am thinking about upgrading to Pro.  In the meantime, I’m trying to earn a few days of Pro by use of Challenges.  For example, I’m currently working through the Greenhorn Challenge, which encourages me to input enough logging data to earn 50 points, at which time I’ll be awarded one day of Pro use.  Sounds like low-hanging fruit, incentive-wise, but it works.  Which is probably why it’s hanging so low, yo.

A few things to change?  I’d love to see a reminder – that you can CUSTOMIZE – for updating your logbook.  While I might throw the phone if it nagged me, having a reminder that I can set/unset (“It’s been six hours since your last glucose test!!”) would be handy.  I’d also like to see an open field for inputting exercise, as I don’t often exercise in perfectly round numbers, and it would be great to see an illustrated tag field in the future for exercise options.  Basically, I’d love to ditch RunKeeper and have mySugr take over entirely, logging everything.  The reports function is nice, as far as PDFs go, but having something I could export into an editable document would be more useful, for things like basal rates, insulin-to-carb ratios, etc.

I also need to mention the sounds:  THEY RULE.  I know how goofy it sounds, commenting on the little whizzes and clicks of an application, but the sounds on this app are faintly robotic, and I feel like I’m virtually ticking something off my To Do list when I tag a data entry or enter a blood sugar.  Even when you press the “monster” and he squeals for attention, it’s entertaining and borderline cute.  A++ for sounds on this app.

It’s hard to say how long I’ll keep at using this application, since I’ve only been using it for two weeks.  But, to be honest, it was kind of nice to feed the monster and feel a little removed from it.  Or maybe freed from that need to be all harmonious with it.  By distancing myself from it and letting myself treat it as a task-oriented “game,” it makes the philosophy of “test, correct, and move on” easier to adopt. 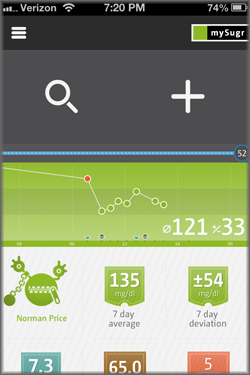 And Birdy loved it, which makes me like it more.   She likes clicking on his avatar and seeing him flap his arms around and squeal animatedly.  She likes hitting “done” when I finish entering meal data because that’s when Norman simulated chewing and says, “YUM!”

“I want to see the little Norman Price diabeedles guy.  He’s so frustrating sometimes, isn’t he, Mawm?  But not all the time, right, Mawn?”

“You are so right, Birdzone.”

Want to download the application and take it for a spin yourself?  Click here to go to iTunes.  You can find out more information on the mySugr website, and learn about the Companion version, as well as the coming-soon Junior version.  And you can learn about the Monster Pack (aka the development team), too.  mySugr makes the monster easier to manage, even if he’s a sometimes frustrating, but not all the time, kind of guy.   Clever application, and one that I can see inspiring PWDs around the world to take their monster to task.

Disclosure:  I don’t have any financial anything tied to this company.  I like Fredrik, and he asked me to try out the application.  So there you go.