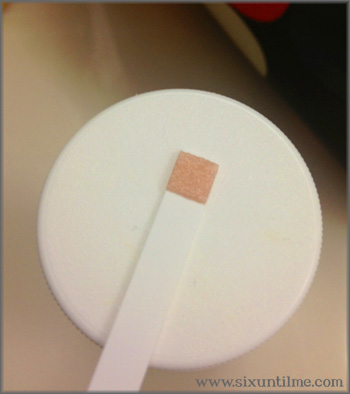 The infusion set was on the tail-end-of-day-three-just-about-day-four, so maybe it was starting to sour.

Or maybe it was going to the beach/playing in the garden/flying kites that tousled the site too much, causing the tubing to untwist just a little bit from the lock at the top of the insulin cartridge.  (Is that even possible?)

Or maybe it was just a rogue, weird thing that’s never happened before in ten years of insulin pumping but decided to happen yesterday.

Either way, it was the fact that my dinner bolus didn’t actually end up pushing through the tubing and instead pooled up at the top of my pump tube that caused my blood sugar to skyrocket and then for my body to throw out some borderline-moderate ketones for the first time in a long time.

It was one of those perfect storm moments, where all the crap that can be unsettled is unsettled:  no Dexcom sensor on (letting my skin rest for a few days as to not aggravate skin irritations – first break in a several weeks … of course), checked the pump site but not the tubing when my blood sugar came ringing in at over 300 mg/dL (had I checked the tubing, I would have seen the huge air bubbles and noticed the jacked up luer lock connection).  And of course the high made me mad because I thought I had calculated my dinner bolus really well, so I went for a “revenge run” in the neighborhood that night, not checking for ketones before I left (stupid).

Going up the hills on my run was a lot harder than usual, and briefly considered grabbing on to drooping branches to drag myself through.  I wasn’t exceptionally thirsty, but when I took a drink from my water bottle at the end of my run, I realized I drank the whole thing in one gulp.   When I got home, I noticed that the skin underneath my eyes wasn’t just dark, it was gray.  And  I realized I had that “high mouth” taste to my teeth, the one where you feel like you’ll breathe out and actual overripe cherries covered in model airplane glue will tumble out from behind your teeth.  I should have known I was throwing ketones.  Peeing on the ketone test strip and seeing the pad change from “beige” to “raspberry” wasn’t a shock.

It took a new pump site, lots of water, a Pedialyte popsicle that I permanently borrowed from the Birdzone’s “just in case” stash, and more patience than I actually had on hand to disengage from the ketone conundrum.  Nice touch, for my body to remind me that I do need to worry about ketones from time to time by making it a six hour mess that ultimately ended in a low blood sugar. (Thank you, 3 am glucose tabs, all running amuck in the very bottom of my dresser drawer. I’m not even sure how old they were.)

You may have won this round, diabetes, but I’ll get you next time.  Next time.