How to Have Sex with an Insulin Pump.

Don’t.  For the love of god, do not have sex with your insulin pump.  It’s an expensive insulin delivery device, and it’s not to be trifled with.

But if the Google search you made was to find out how to have sex with the insulin pump in the vicinity, then that’s a whole different take.  Because that topic comes up a lot in the women’s discussion groups that I’ve taken part in, and it was a particularly hot topic at the Diabetes Sisters conference earlier this month.  The same sorts of questions come up every time, from new pumpers and people considering adding a diabetes device to their management plan:

(And, for the record, I love that these questions get asked.  And the best part is, they’re asked in rooms full of women who have either met for the first time that day or haven’t even formally met yet.  Diabetes, for all its chaos, does bring a certain level of discussion comfort and camaraderie, and I love that.  Love.) 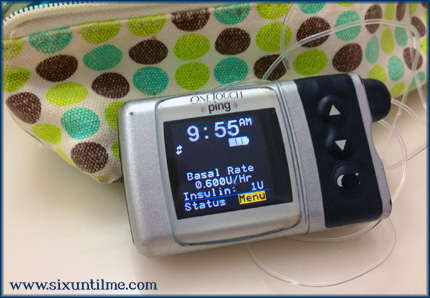 “How do you deal with wearing a device when you’re trying to be, like, naked?”

This was a tough hurdle for me, because I went so long without wearing any devices.  Diagnosed as a kid and not pumping until 2004 or CGM’ing until 2006, I spent a big part of my diabetes life without any external “symptoms,” so to speak.  Initially, I needed to be comfortable with my device(s) before I could expect anyone else to be, and that did take some time.  But I like the “no big deal” philosophy to these moments.  If I give the impression that these devices aren’t a big deal and should be taken as a small part of the bigger whole, then I hope my partner will follow suit.  For the most part, wearing a pump and a CGM isn’t something I feel self-conscious about, but being honest, there are days when I want to rip them both off and throw them across the room in pursuit of feeling truly ‘naked.’  I don’t like having these artificial bits and pieces stuck to me all the time, but I try to keep tabs on the bigger picture, which is my overall health.  Sounds cheesy, but it’s the truth.

“Do you disconnect during intimacy?”

Personally, I do.  I don’t like having anything connected to me during those moments, because it becomes a distraction.  I like feeling like diabetes is a back burner issue in the bedroom, or at least as much of one as I manage.  When I first started pumping, disconnecting felt awkward because I didn’t know how to make it feel sexy (“Oh, let me just slip out of my medical device and into something more comfortable,” never had the right tone to it.) and it took me out of the mood a little bit.  But once I was comfortable pumping, in all capacities, I was comfortable with this part, too.  Disconnecting is kind of like my “mating call” now, which is a bit strange but also ‘no big deal.’

“Does it get in the way, physically?

Not for me, because I’m already disconnecting.  And I take care to keep my devices as out-of-the-way as I can manage, keeping infusion sets on the back of my hip and sensors on my thighs, leaving my abdomen feeling “normal.”  Sometimes it gets in the way in the initial moments, like when it’s being disconnected and I’m trying to figure out where to stash it for the time being (bedside table? under a pillow? on the floor? It’s a tough device, but I’m not willing to throw a six thousand dollar medical device onto the floor with reckless abandon.), but for the most part, once it’s disconnected, I forget about it.  The trouble is sometimes remembering to reconnect afterwards.  Some women set the alarm on their pump to remind them, but I’m not even close to that organized.  Others set reminders on their phone.  I’ve never gone to bed without reconnecting, so I’m going to pretend that I will always remember?

“Does it get in the way, emotionally?”

Yes, at least enough so that I can’t outright say no.  Can’t lie – not being able to be completely naked (sans pump site and CGM transmitter, for me) is a weird feeling, and I always feel like I need to give Chris a head’s up as to where my devices are currently connected.  “Be careful of the site on my right arm,” or “My sensor is on the left,” sort of directions feel anti-intimacy, for me.  But that’s where the relationship with my husband comes into play – he makes me feel like diabetes is something we can openly discuss, so it makes device topography easier to disclose, knowing he’s not creeped out by this stuff.  The emotions about this sort of thing ebb and flow, just like emotions about diabetes in general, but it’s most important for me to be able to talk about it with Chris.  Being part of a team that allows for the emotional highs and lows helps keep devices from getting in the way, mentally.

You can have sex with your insulin pump … by your side.  Or on the bedside table.  Intimacy with diabetes requires a little forethought in addition to the foreplay (terrible pun), but it can be done.  Just don’t shag your actual pump, or you could end up with a different set of issues entirely.

Insulin Pump Refill: In a Pinch.