No Diabetes, Traveling By Kerri March 29, 2006 No Comments 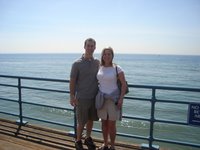 I saw the Ferris Wheel before anything else. Looming as large as the sun from where I stood, I wiggled my toes in the Santa Monica sand and breathed in the ocean air.

“This is nice, you know.” I turned my face up to the sun. 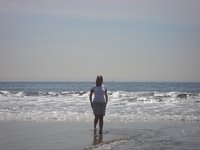 I stuck my feet in the Pacific Ocean for the first time and wondered if there was more home to be found in California than there was in New York. The ocean waves laughed up the shore towards Chris’s feet.

Could this be home?

Shaking off thousands of questions from our minds and the sand from our feet, we left behind the serenity of the ocean for … dinosaurs. 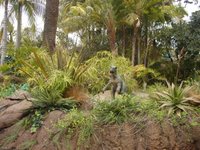 Universal Studios proved to be worth every penny of admission. There are dinosaurs. And while I’m aware that they’re pretend, those suckers are huge and they roar and they’re quite intimidating from the confines of the Jurassic Park ride. As the enormous Tyrannosaurus Rex head tried to eat us, the 8 year old girl sitting next to me clutched my arm frantically and hid her face in my elbow. Which didn’t matter much because my head was ducked into Chris’s shoulder.

The Universal Studios Tour was pretty decent as well, taking us from studio lots to an up-close experience with both Jaws and King Kong. One of the most amazing sets I’ve ever seen (because I’ve seen so many?) was the War of the Worlds set with the plane crash. Unbelievable. The plane used was an actual Boeing 747. A hush fell over the crowd as the tram pulled in view of the set. 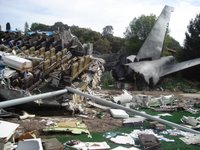 After exploring the park extensively, eating Pizza Hut pizza, and then continuously bolusing to correct the ensuing high bloodsugar (oops), Chris and I ventured off to Fancy Dinner with friends.

After dinner, we checked out a club in Venice Beach.

“Lady, this is the fakest license I have ever seen,” the bouncer said, picking at the corner of my laminated Rhode Island license with his fingernail. “Laminated?? Come on.”

Raised eyebrow. Conferenced with the other doorman. He reached over to open the heavy brass doors and we slipped inside to the Buffalo Club for a night cap. 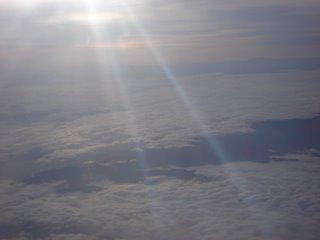 Hours later, never sleeping, we drove our little Hybrid Car to LAX. Eyes heavy with exhaustion, we boarded the plane at 5:30 in the morning.

“Did you have a good time? Do you like it here?” Chris asked, yawning and stretching one arm across my shoulder.

I looked out the plane window. The sun was rising.

The One About the Stupid Pumpkins: A Photo Essay