No Diabetes, Traveling By Kerri March 28, 2006 No Comments

Exploring the Sunset Strip, Chris and I sat at a stop light in our little hybrid.

“Listen, Kerri.” Chris paused, spreading his hands dramatically over the steering wheel. “Not a sound.”

The car seemed like it turned off when we were at stoplights. The motor made no sound. No clicks, no whirrs, no noises whatsoever. An odd sound to my ears accustomed to VW German performance engines.

Looking over to my right, there was a big black Escalade, windows opened. A handsome man dressed to the hilt, complete with enormous watch and crisply pressed shirt, stared straight 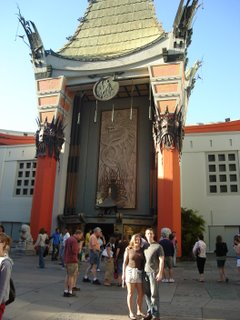 “Chris, it’s the guy from Reading Rainbow!” I tried to exclaim without moving my mouth. The Escalade started to pull away in anticipation of the light changing.

“He was in Roots. Did he play Kunta Kinte? I can’t remember,” Chris said.

“He played Kunta.” I said. The Escalade pulled ahead of us.

“Yeah. It says ‘Kunta’ on his license plate.”

Later on, we were walking down Hollywood Blvd. Passing the famous Chinese Theater, we stopped to take a few pictures. The boulevard was teeming with street performers dressed as Jack Sparrow, Hellraiser, Yoda, and Hagrid. People were stopping to have their picture taken.

“This is so fun!” exclaimed a young college girl to her friends, wrapping her arm around Shrek.

“Lady, we don’t work for free. Remember that,” responded Shrek with a growl.

Chris and I wandered down the street towards the Virgin Megastore. Bright red letters scrambled around the edge of the building like the New York stock exchange ticker. “In-Store Performance! Live! Gomez!!! 7 p.m.!!! March 24th!!!”

“Oh my god Gomez is coming here?! We have to see them! We have to!” Trying not to jump up and down but hardly able to control my excitement, I dug my fingers into Chris’s arm and danced around a little bit.

There’s a history with this band. 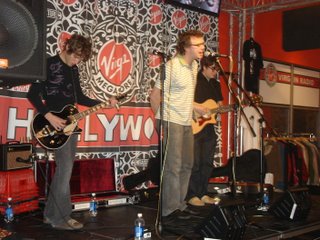 Back in 2003, I had tickets to see Gomez play at the Avalon in Boston. Drove up to Boston with my buddy from Ireland, talking about how excited we were to see the show. Tickets in hand, we ran to the club. No line outside. Weird.

“We’re here for the Gomez show.” My friend told the six foot four bouncer with biceps like freight trains. Bouncer flexed and traced the outline of his muscle with a lazy finger. “Sorry. Show was last night. You missed it.”

So I’ve been this close to seeing Gomez before, only to have my own inability to check the date on the ticket keep me from indulging. I wasn’t going to miss them a second time.

Brilliant performance. Such a cool band. And I can’t believe that the sources of those incredible voices were just a few feet away from me. Their new record is being released on May 2nd. Do yourself a favor and pick it up.