No Diabetes, Traveling By Kerri March 26, 2006 No Comments 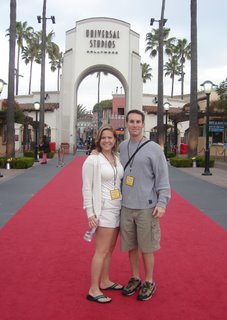 Working a nine hour day on Wednesday and promptly jumping on a plane to Chicago caused me make the following, bleary eyed statement: “I can’t wait to get on the plane.”

Chris’s eyebrows went up. “What?”

I am officially a seasoned traveler, after a fashion. We flew from Providence to Chicago, then Chicago to LAX. Hours upon hours of travel. I checked luggage. I ate expensive airport food. I sighed about flight delays. I cranked back the time on my pump as we crossed the time zones. Chris bought himself a neck pillow and bought me this:

Arriving at LAX (at 4 am to my East Coast exhaustion), we grabbed our

luggage and traipsed off to the car rental place. We passed a black man wearing a blue warm up suit and a matching hat. He was surrounded by his luggage. A scruffy beard framed his familiar face.

Chris reached down to adjust the strap on his carryon bag. “So yeah, that was definitely Mr. T.”

Ah, I pity the fool who wasn’t there to see him. Quality celebrity sighting.

We rented a Honda Civic Hybrid for our travels, based on the clogged highways that Chris remembered from when he lived in LA. That car was phenomenal. Aside from the fact that it was reluctant to climb hills with any vigor, Chris and I drove that little Civic for four days and barely used half a tank of gas. Considering all the traffic we constantly sat in and the miles we put on the car as we explored, I am now completely sold on purchasing a hybrid car.

Note to VW: Why don’t you make a hybrid? I would buy it. And love it. Promise. 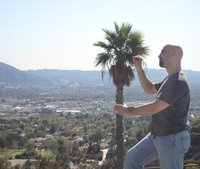 Staying in Valley Village, we were minutes from Industry Giants like Universal, Disney and NBC. Sunshine streamed in the windows of our eco-friendly rental as Chris took me on a tour of his former town. And while he was at his business meetings, his friend Joe and I ventured up a mountainside and picked coconuts (as Joe effectively illustrates here.)

Does this city have anything for a Country Mouse like me? How exactly does the Santa Monica pier compare to my little Napatree Point Beach? Did an 8 year old girl and I end up clutching each other’s arms in fear on the Jurassic Park ride at Universal Studios? Was that Lavar Burton I saw on the Sunset Strip? Did I really catch the Gomez in-store appearance at the Virgin Megastore on Hollywood Blvd? 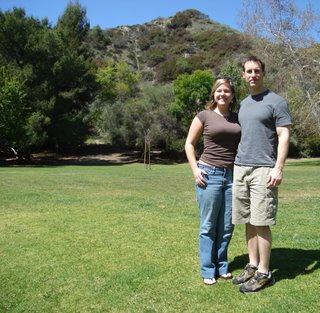 Same Six Until Me time.

Same Six Until Me channel.

The Patdown: Diabetes at the Airport