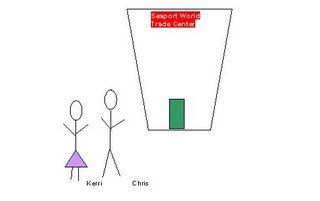 We were late arriving because I managed to get us lost. It’s what I do. Convinced I knew exactly where it was but in reality not having the faintest notion, I dragged Chris around Boston in hot pursuit of the ADA Diabetes Expo.

Bright Boston sunshine reflected off the buildings as we strolled towards the Seaport World Trade Center.

“There it is!” The relief in my voice was unmistakable. We had been walking for over ½ an hour. (I get lost everywhere I go. Everywhere.)

Walking in to the building, we were greeted by friendly, smiling volunteers clad in red shirts. The red and white balloon archways framed the dozens of exhibition tables set up in the convention center.

Interesting things that I saw:

Medtronic was there and I made a beeline for their table. (As illustrated) Spoke with a nice guy 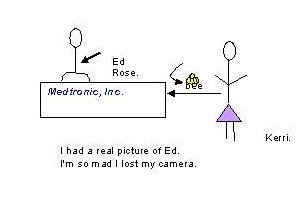 named Ed Rose Jr. Turns out that Ed Rose Sr. and the rest of the Rose clan are all diabetics of varying degrees. Ed Jr. is the only one who isn’t. He and I spoke at length about the Insulin Pump/CGMS hybrids that are slated for release this fall, his father’s reservations about pump therapy, and the diabetes blogging community. Solid pump company, Medtronic. I’m proud to claim myself as a Minimed Paradigm Pumper.

Splenda had a terrific booth set up as well, with a column of yellow and white balloons marking their territory. A young girl and her associate handed out Splenda recipes and free product samples. Splenda has been a new addition to the household, slowly phasing out my old standy: Equal.

The ADA people were everywhere. Ed Garcia from the RI office came and greeted me warmly, confirming that the day had been a great success. “Did you get here a while ago?” he asked. I murmured something about “half an hour ago” and “lost in Boston” and “have no sense of direction.” But it was nice to see some RI Representation in that huge convention center.

After a brief meeting with my former pediatrician, Dr. Alyne Ricker (who has been listed as one of Boston Magazine’s “Top Docs”! Check out the link!) , Chris and I made one last round. It was overwhelming, really. All those people affected by diabetes in one way or another. Older people, little kids, all races and shapes and sizes … a veritable potluck of patients. Those who live with the disease. Those who love someone with the disease. And those trying to cure the disease.

There’s something about a room full of people who are dedicated to bettering the lives of diabetics that makes you feel like you’re part of something tremendous.

Sidenote: Next time I’ll try not to lose my digital camera and all the Expo pictures that I intended to download onto Blogger. For now, the Excel Stick People Montage was the best I could manage.

A Look at Body Posi Betes