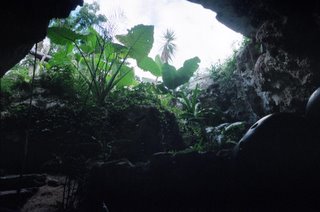 There were about 20 of us on this excursion, including Chris and myself. Our guide, Miguel, rode up front and the Other Guy followed the back of the crew in a red Jeep Wrangler.

“Stick with me, okay! You keep up, okay,” Miguel’s voice carried back on the wind.

But I was just in front of the Jeep, riding as leisurely as I could on my bicycle with the broken seat, my bloodsugar at a crispy 384 mg/dl and the insulin pump tucked safely in a plastic bag in our stateroom on the cruiseship.

The theory was this: Since we’d be riding bikes for a few miles and then snorkeling for an hour or two in a cavern in the middle of Mexico, I figured I’d disconnect the pump for the afternoon so I wouldn’t have a Low of Epic Proportions. I couldn’t think of anything that made me more nervous than being in a dimly lit cavern and on the verge of convulsions, with no medical facility closer than a helicopter ride. And possible losing my pump.

Apparently I forgot about the potential for an Enormous High.

That morning, Chris and I woke up early and went to have breakfast. It was the last day on my infusion set/reservoir combo and I planned on wearing the set right up until I disconnected for the excursion. We sat down on the deck of the ship with our breakfast plates and a hot cup of coffee and chatted as we enjoyed the view of the aquamarine waters of Mexico.

I had no idea that, since I was at the end of the reservoir, the heat had caused a few bubbles to crop up in my reservoir, which siphoned out into the tubing, which crept into me instead of my insulin when I bolused for breakfast.

I disconnect and leave the pump in the room. Chris grabs the bookbag, which is loaded with a Humalog pen, five bottles of juice, two peanut butter and jelly sandwiches (thank you, room service), my testing kit, a syringe, and a spare bottle of Humalog — in addition to everything else.

We trot down the gangplank in a terrifically pirate-esque manner, and join our group for the cavern excursion. Before I get on the bike, I test.

“Chris, I need the insulin pen. I’m all cranked up from breakfast.” He hands it to me, I take 4 units and we start to ride.

20 minutes into the ride, the group takes a break. Chris shields me as I test again.

“Chris, I’m going up, not down.” Panic, like a warm blanket, covers me as I contemplate the potential for ketones and DKA on this many mile bikeride through 90 degree Mexican heat.

“It’s okay. Drink this water while we ride. And we’ll test again in a few.”

I down the water. Another 20 minutes passes. We break, shortly before we reach the caverns. I unzip the little black bag that holds my kit.

“I need the pen again. It’s still going up.” I can feel the twinge of a backache. The sweaters on my teeth. That cinderblock that is settling in between my eyes, pressing against them with its sharp corners. That panic. Am I going to have my first DKA episode in Mexico? Fear wins over rationale as I uncap the insulin pen with my teeth, instead of waiting for the first dose to catch.

Another 3 units of Humalog hits my system. We ride just a bit more and then we start changing for the cavern dive.

And the heat becomes more intense. I’m hot and sticky from the hot sun and long bike ride, but now the sweat is clammy and insistent. I look up and the leaves on the trees are throwing patterns on the rocky steps leading to the cavern. My mouth feels tingly. Chris is talking to me but I can only focus on half of his words. Every sound I hear bounces from the tip of my ear, spirals into my eardrum like a marble in a funnel, and waits a few minutes before registering in my brain.

He’s saying something but I can’t reach through the fog enough to hear him.

Three bottles of juice, half of a melted peanut butter and jelly sandwich, and a moment where he wipes away my frantic tears later, 104 mg/dl.

And two moments after that, we’re peering down into 30 feet of dimly lit water, armed with 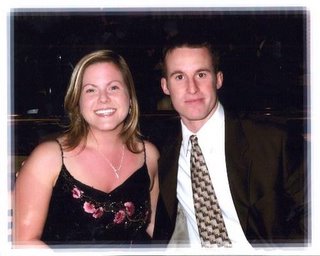 nothing more than a snorkel, a mask and a flashlight to illuminate the depth. The crystalline water reveals a forgotten Myan burial ground, snow white sand, and fish that shine blue when my flashlight beam grazes them. Stalagmites and stalactites jut out from every surface.

Panic and fear are left on the edge of the water as Chris and I explore the cavern, occasionally finding each others’ hand in the deep.

Part One: The plane ride.

Insulin Pump Refill: In a Pinch.

Not Guten for My Gut.