Traveling By Kerri February 6, 2006 No Comments

My Rhode Island self could barely conceptualize the idea.

We rounded the bend after passing Star Island and saw the massive cruise ship docked in the Miami harbor: The Fascination.

“Oh my goodness, Chris! That ship is huge! We’re going on that? We’re really going on it? For a whole week??”

Kenny, who lives in Miami and is a friend of Chris’s, laughed as he drove us closer towards the ship.

“I take it you’ve never been on a cruise before.”

For those of you who have had the luxury of cruising before, forgive me for sounding so excited about it but that ship was the most incredible thing I had ever seen. Ten decks, two pools, a waterslide, bars, dance clubs, hot tubs, a gym, dining rooms, and countless state rooms! I was amazed at the most trivial of things: the super magnets that held the bathroom door opened when the ship tossed a bit, the fact that room service really would show up at four in the morning with a Portobello mushroom sandwich if you asked them to, and the towel animals. 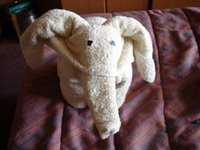 Ah, the towel animals. Chris told me that the housekeeping services would make animals out of the towels, but I wasn’t sure. Sounded complicated. And kind of messy. But the first afternoon, upon our return from dinner, I opened the door to see a dog crafted entirely out of white bath towels, sitting on the bed.

I think he got more out of watching me enjoy everything than he did out of the actual cruise itself.

Every time I went back into the stateroom, I would open the door oh so slowly, just in case there was a towel animal peeking at me from the bed. I definitely bought the book on how to make the little buggers. I plan on making every towel in the apartment into an elephant, a dog, a hanging monkey, or maybe even Voltron.

The food was incredible. Wearing my pump was truly the best course of action, as bolusing for some of these meals was tricky. A two hour dinner of stuffed mushrooms, filet, fresh fruit, escargot, stuffed chicken, vegetables smothered in butter sauce, and decadent desserts would not have fared as well were it not for the grace of the Extended Bolus.

And my diabetes remained quiet, for the most part. The insulin flowed freely and my sugars didn’t crest above 230 mg/dl or below 60 mg/dl (not bad for excessive eating and drinking).

Except for Wednesday. When we were snorkeling in a cavern in Cozumel, Mexico, miles from the ship and my insulin pump.

But that’s a story for tomorrow.

Until then, enjoy a picture of Chris and I at the first dinner night, with our mariachi pal. 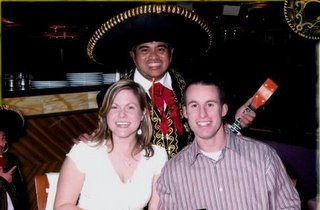 Part One: The plane ride.

Vegas, (with my) Baby. Vegas