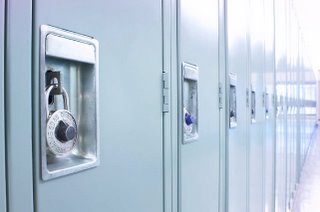 It was fifth grade and Mrs. Latz was our language arts teacher. It was the first year we had lockers and they were situated outside of her classroom. It was cool, having a locker. We cut out pictures from Tiger Beat magazine and hung them on the inside of the door. Nicole, who was my locker partner, and I cut out pictures of tropical fish and made our locker an aquarium. She even made a fake aquarium filter out of a used water bottle and some aluminum foil.

Nicole, Christie and I were walking back from the cafeteria after lunch and we stopped by our lockers to put our lunchbags away. Christie grabbed her reading book from the top shelf of her locker. Nicole didn’t need anything because she already had her book. I reached into the bottom of our locker to retrieve my reading book and saw a folded up piece of paper stuck in the locker vents.

“A note! Kerri got a note! Oooohh…” Fifth grade immaturity gave way to giggles and blushing as the three of us crowded around the note to read.

“Dear Kerri, the Dirty Diabetic. No one likes you. We’ve made a whole club about how we don’t like you. It’s called the “We Hate Diabetics” club.”

A picture of a needle encased in an accusatory red circle was scribbled beside my name. No more needles. No more insulin. No more Kerri.

Nicole and Christie stood there, not saying anything. Until I started to cry.

“That’s not right. That’s mean! We’re taking this to Mrs. Latz. She’ll find out who did this.” They took the note from my shaking, 10 year old hands. They took my hands in theirs and led me into the classroom.

The note was handed to Mrs. Latz and she read it while Nicole rummaged in her pockets for a tissue for me.

Through the miraculous methods that only 5th grade language arts teachers possess, Mrs. Latz found out who has left that note in my locker. The “We Hate Diabetics Club” consisted of one, miserable, red headed girl who sat with me at lunch, whose eyes were red rimmed as she shuffled towards me at the urging of Mrs. Latz’s hands.

Red Head stopped in front of me and stared at her feet.

“I’m sorry, Kerri,” she mumbled, looking to Mrs. Latz to release her.

“It’s okay,” I said back, looking for her to release me.

Red Head remains the only person in my life who has ever tried to make me feel bad for being diabetic. She made me cry and, when I think about the moment I opened that note, my face still flushes red with surprise. I wish I could forgive her for her childish words, but I still can’t. She and I continued through middle school and high school together, attending the same parties and dances and mixing with the same group of friends, but I always held her at arm’s length. And when I saw her at the beach last summer, after a 4 year absence, I didn’t walk over to say hello. Twenty-six years old and still holding a grudge against a little girl who was the only member in cruel little club.

In Which I Fake a Low to Get out of the Obstacle Course.
Share: