Thirty-one years ago, I was checking my blood sugar with this giant lancing device, using a heavy brick of a glucose meter, and chasing my blood sugars with Regular and NPH insulin.  If you told me that the future of diabetes would include streaming video of where my blood sugars have been and where they might be headed, I’d have bonked you on the nose with a newspaper.  “No.  NO!  Bad dog.  Don’t make false promises – they’ve already told me a cure would be here in five years and I know that’s bullshit.”

But oh hey, Dexcom G6.  Just approved by the FDA and slated to hit the market (and my body) sometime in the second half of the year (but potentially at the close of Q2), continuously monitoring my blood sugar just got easier.

I know a lot of sites have already covered the Dexcom G6 approval (this write up at DiabetesMine is very thorough), but I wanted to give a few quick details and a look at the demo kit I received yesterday.

Here are the new Dexcom bits and pieces that were sent over to me.  No, none of these pieces actually work as they are part of a marketing outreach plan, and yes I was disappointed as hell that I couldn’t stick on the new G6 sensor as I am very excited to try it. 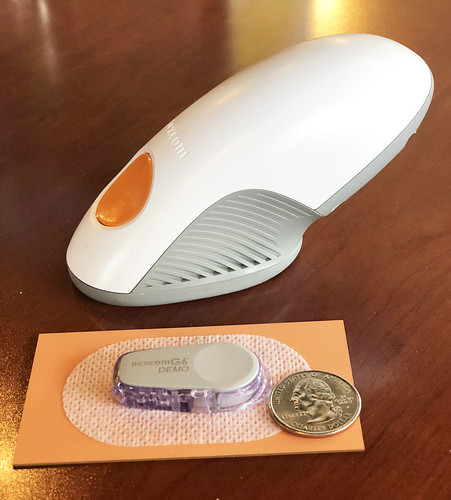 This is the new insertion device – looks straight outta Wall-E – and the new transmitter and sensor.  The G6 transmitter is much thinner than the G5, by about a third. 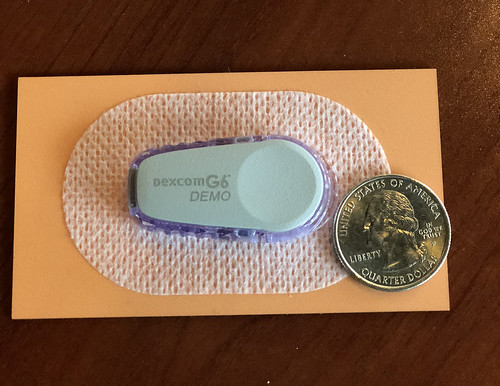 Here is a visual only useful for Americans.  But this is the transmitter and sensor pitted against a quarter, for reference.

And here is the transmitter and sensor all on their own.  It’s very thin and it would have been great if I had a G5 transmitter to compare it to, but my current sensor is only on day 4 and there’s no way I’m ripping that thing of yet.

Here’s a quick look at the demo receiver (with an off-center thumbs up at the end):

First impressions on this new iteration of my CGM standard?

I talked with Dexcom’s CEO, Kevin Sayer, about the new G6, and he was kind and patient as I took the call from a busy coffee shop.  (And if you have other questions, there’s a very good FAQ section on Dexcom’s site that might have an answer or two for you.)

I asked him about factory calibration for the G6, and he said that the goal was to have the algorithm perform consistently on all days and all ranges, and that performance is very strong.  The accuracy is a experience similar to the 505 and across all ranges, it performs better on the first day than G5 did.   (A nice note, as many Dexcom users have complained about poor response from their sensor on the first day.)

There’s also a new alert in play for the G6 system, one that alarms when a low is expected.  “The “Urgent Low Soon” alert is a new alert that can warn users in advance (within 20 minutes) of a severe hypoglycemic event (55 mg/dL) — allowing them time to take appropriate action before an event happens.”

On the 10 day use period for the G6, it’s confirmed that the sensor times out and can’t be restarted.  “As we got our system approved under the special controls required by the FDA, the system cannot be used longer than it’s approved duration,” said Kevin Sayer.  Personally, this is a rough change, as many people with diabetes pay for their CGM supplies out of pocket, and a hard stop at 10 days would cut into a lot of budgets.  But he mentioned that a company goal is to extend the life of the sensor, and that they are working for approval for 14 day use, after they can meet the requirements set forth by the FDA.  There isn’t a set timeline for a 14 day sensor, but Sayer was hopeful for 2019.  He also mentioned that Dexcom will be providing their own overtape to help keep the sensors in place for approved duration.

The sensor size is much smaller, and Kevin says that another company goal is to continue to reduce the sensor size.  “When I see kids running around with the sensor on, I look at them and say, ‘This has got to be smaller.'”  Agreed.  And the new G6 is smaller in hopes of reducing tugging and snagging on clothes, which will be useful in my house (see also:  my son uses my sensor as a rung with which to climb me)

One of the big things about this approval is that Dexcom is moving to the FDA 510K class. The FDA has established standards as to how sensors have to perform to be approved. The FDA website defines a 510K class device as “A 510(K) is a premarket submission made to FDA to demonstrate that the device to be marketed is at least as safe and effective, that is, substantially equivalent, to a legally marketed device (21 CFR §807.92(a)(3)) that is not subject to premarket approval.”  Basically, approvals should be able to roll out in a more expedited fashion as a result.  Which is exciting.  Full docs from the FDA on that process can be found here.

Technology keeps getting better.  It’s an exciting time to be a CGM user.  But as I write this, I’m reminded that this technology is only great for people who can access it, and that folks in our community still struggle to access insulin every day.  Which is why I’m closing with a request for you to consider donating to the International Diabetes Federation’s Life for a Child program, and/or to explore participating in the T1International #insulin4life efforts.  Access matters, and even the best devices are useless if we are without insulin.

Let’s all move forward, making sure we take care of our community as a whole along the way.