Trying out the Freestyle Libre System

[DISCLOSURE – PLEASE READ:  The team at Abbott reached out to me and asked if I’d like to trial the Freestyle Libre system.  I said yes.  After my doctor approved a prescription for the device, Abbott sent out the scanning device and two sensors at no cost to me.  This whole review needs that bias lens in place.  Good?  Good.  Thanks for reading.]

When I was first handed the Autolet lancing device back in 1986, I remember being completely freaked out.  And rightfully so, because that thing was a beast and blasted my fingertip to bits on a regular basis.

But over time, lancing devices became smaller and less painful.  And meters became smaller, less cumbersome, and more accurate.  In 2006, I tried a CGM for the first time and my mind was BLOWN because there was this device, stuck to my body, sucking out interstitial fluid and offering up a trend graph of my blood sugars.  And it alarmed when my numbers went above or below my personalized thresholds.  Streaming video of my blood sugars versus a polaroid picture version is progress in my book.

And for the last week or so, I’ve been trying out the Freestyle Libre system. (Note:  they asked that I always use it’s full name – the Freestyle Libre system – so please excuse my formality here on this weblog posted to the world wide web.)  I’m wearing this device in addition to my Tandem X2 insulin pump and my Dexcom G5 CGM, so I’ve gone full robot. Pros and cons?  Don’t mind if I do.

The insertion process is a cake walk.  To be fair, I’ve only put in one sensor so far, but it was as painless as this needle crap can be.  And the adhesive is amazing.  I’m clearly a fragile flower in the skin department, with rash reactions to lots of adhesives, and I’ve also spent a lot of money and time taping down pump sites and Dexcom sensors in order to get the 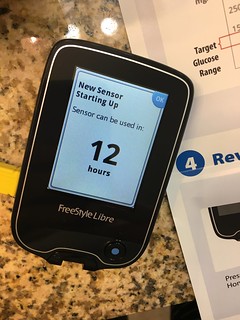 approved time out of them.  But the Freestyle Libre system has been stuck to the back of my right arm for 8 days now without any puckering or shifting.

The wearability of this device is also very good.  The profile of the transmitter is very low, making it harder for door jams and bra straps to grab.  It doesn’t leave a giant lump underneath my clothes, and the completely circular shape leaves no snaggy sharp edges.  Subtle, and I like it, and it was harder for my son to grab onto and use to climb me, which was another bonus.  And if I had a child with diabetes, I’d be very inclined to check this device out for them, when taking into account wearability and pain factors.

No calibrations are required, which is kind of magical to me.  This thing goes on, stays stuck, and doesn’t ask me to do anything other than scan it when I feel like scanning it.  And I have scanned it like crazy.  The first day, I scanned a whole bunch of times and enjoyed the little BOOP! noise it burped out when activated.  And I also appreciated being able to add notes after checking my BG, citing food, exercise, etc.

The screens are nice, too.  Every time I scan, I see where my blood sugar is, where it’s been, and an arrow indicating where it might be headed.  I can also see a daily graph, average glucose for some time spans (7, 14, 30, and 90 day assessments) and also Time in Target, which is a real win for me, as time in range means more to me than my A1C results.  Unfortunately, the touch screen on my device sucks and I have to press the screen at least three times in order to get it to respond.  I assume it’s not like this on all devices.  I haven’t downloaded the software yet to see my data, and I could also take the Tidepool route, as they recently added the … Freestyle … Libre … system to their slate of supported devices, but I’ll explore those options in the coming weeks and report back ASAP.

And the basic operations of the device?  A big pro feature.  It’s supposed to make me check my BG regularly.  It accomplishes that goal.  Not having to prick my finger at all is a huge bonus, and it takes half a second to get a result.  (I was also able to easily and reliably scan the sensor through a long sleeved t-shirt, a sweater, and a heavy winter coat.  The thing has good range.)  I scan at least 10 times per day, and it’s easy and painless.  A huge plus.

It doesn’t alarm when my blood sugar is out of range.  That’s a big deal to me, especially since I don’t often feel my low blood sugar symptoms.  Also, after using a traditional CGM for over 10 years, I’ve grown accustomed to the data being not only available but LOUD.  The alarms have potentially saved me from dangerous situations, and I am grateful for them.  I also rely on them, as they catch me when I forget to check in on my BG.

The 12-hour warm up period is not optimal.  I’m already frustrated by the 2 hours I have to wait for Dexcom to get hot, so the 12 hour waiting period for the Freestyle (wait for it …) Libre system to ready itself for use is agonizing.  I put my sensor on at 9 in the morning and had to wait all day for data.  Granted, the sensor works for 10 days after it is inserted, but the 12 hours?  Not fun. 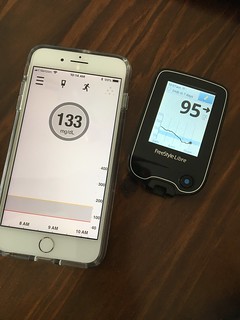 The scanner device is another separate piece of technology that I need to keep charged and have with me at all times.  I’ve left it in my car overnight, on the kitchen table when I meant to have it in my purse, etc.  I’m sure that I’d become used to remembering it, just like I did when I had to carry a Dexcom receiver, but at the moment, I forget more than I’d like.

The Freestyle Libre system is easy to use, but it doesn’t replace the Dexcom CGM, for me.  Continued use would take a bite out of those annoying things, like forgetting the scanner at home.  Does it make checking my blood sugar easier?  Yes.  Are the trends useful?  Yes. But the fact that it doesn’t alarm is the biggest drawback for me, and I am not sure I’ll ever change my opinion on how important those alarms are for me.  Also, I have years of Dexcom use and trust, so it’s hard to accept new tech without bucking up against the idea of change.

These are just initial impressions, and I’m very happy to have the chance to check this tech out.  More on all this stuff in another week or so, after I’ve ripped off this sensor and checked to make sure my skin is still there.  For now, I’ll embrace this new method of diabetes cyborgishness and see where it goes.

If I Knew Then: Continuous Glucose Monitoring – Dexcom.